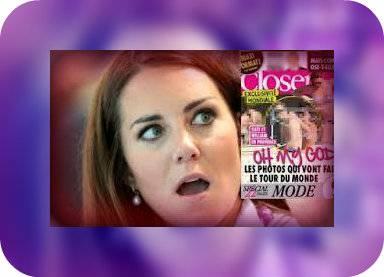 Kate Middleton pregnant again, this time with a daughter?

That tabloid oracle, The Globe, reports that Kate is three months’ pregnant. Its glossier equivalent, Star, claims that Prince William is "ecstatic!" Kate, says Star, is about three months along."

And soon, she’ll be taking off on a grueling royal tour of Australia where the aim is to try to somehow recreate the fantastic surge of popularity the late Princess Diana brought when she arrived in the Great Down Under with trunks stuffed with billowy, colorful dresses, numerous hats, and some fresh and glamorous evening gowns which Diana illuminated with gorgeous tiaras (one from her family, and one from hubby Charles’ s), Queen Mary’s kryptonite-green emerald and diamond choker, pears for every occasion, and a megawatt smile that flashed without Diana having to stretch her mouth open for no apparent reason.

The Royals are trying hard to recapture the magic of that first tour.

They are doing everything the same, hoping to rekindle Diana’s magic.

Maybe they will even try to persuade Kate to imitate Diana’s favorite blond bob!

That would be so weird. But then, Camilla, Duchess of Cambridge, seems to have gotten away with doing that!

Prince William and Kate Middleton are even imitating Princess Diana’s gasp-provoking breaking of royal protocol when she took the infant Prince William along, by bringing wee Prince George with them.

Prior to Diana’s rocking of the royal boat, royal heirs were usually kept safely at home, where they wouldn’t be caught in life-ending events like plane crashes, car crashes, or being eaten by a dingo.

Indeed, I’ve always had my doubts about whether that dingo ate the baby, like the movie said. But Australian experts say that it’s happened more than once, and so I guess that I would hesitate to bring my child to a place where a dingo could devour them, and then somehow arrange all the little baby clothes on a rock, and then smear the inside of my rental car with blood and DNA.

Those Australian dingos are some crafty critters!

So honestly, I would vote for leaving Prince George at home with his mother.  I mean, the surrogate. Dang, dang, dang. What is going on with this keyboard again? I surely meant to write, "his nanny."

Oh, but didn’t William and Kate claim that they don’t want to use a nanny?

So far, though, folks are giving the whole Australian Royal Tour promotion a giant yawn.

For one thing, Prince William’s been there before. And when they went to Tuvalu and the Solomon Islands for all that hula dancing and flower wearing and being driven around in giant fake canoe floats resting atop something that looks like a Polynesian monster truck, on the way back to the United Kingdom, Kate and William transited through Brisbane, Australia, and Kate gave everyone a good look at her posterior when her skirt kept flying up over her head.

And there is still the unsolved mystery of how two Aussie Djs, pranking the hospital where Kate had been ensconced with allegedly life-threatening morning sickness, managed to do a quite-convincing and hilarious imitation of Queen Elizabeth and Prince Charles (mumbling and dithering in the background), and all of this ended up in a nurse who spoke with the DJs on the telephone being found dead.

Dead nurses, disrespectful Djs, dingo doggies devouring babies, and dresses that don’t stay down, well...I would say that the "Ds" have it, and Prince William and Kate should just stay home with Lupo and keep their heads down.

Especially if Kate is indeed pregnant (which seems unlikely).

If Kate, heading into middle age with its high risk pregnancy issues, is indeed pregnant, why go anywhere at all? Why not just stay home, put her feet up, and drink chocolate banana milkshakes? Why risk all that Australian walking about, eating giant shrimps on fiery barbies, and meeting aborigines, which might place a strain on things and then Kate will have an episode with life-threatening morning sickness, and we’ll be back in the hospital with the giggling Djs pranking on the telephone, and who knows what the next poor nurse who picks up the phone will do or say, and if that nurse is then later found hanging from her wardrobe closet again, well....

THIS time, people will talk, I guarantee you.

And don’t forget about the dingo doggie danger. Those Aussie dingo doggies are so dastardly, so super-intelligent, they could easily break through the door while the royal personal protection officers is saying to himself, "Screw this, I am not the nanny, why should I spend so much time standing at attention?" And then as soon as he takes off for the bar or the bathroom or to clean his sidearm or take a nap, the dingos will easily track down the royal baby, drag it off to its den and then undress and devour it, and neither the elderly nanny nor Grandma Carole, dragging on her ciggies day and night, could do much to stand between the dingo and the baby.

I know this for sure because a few nights ago, I woke up in the middle of a movie starring Meryl Streep, and boy, I will never, ever look at a dingo dog the same way again, I tell you what.  When I go to the Outback, I'll have my pepper spray handy.

Now, neither Kate nor Prince William strike me as the dingo-wrestling type. Kate would probably try to find a way to wear the dingo as a wrap, and William would start an conservation organization to protect the dingo, and meanwhile, all the dingo really wants to do is jump up high enough to reach Kate and William’s jugulars, remove their clothing and accessories, turn anything inside out outside in (I know this because it was in the Meryl Streep movie), and lay it out all nice and neat on a rock before dragging the bodies to the dingos’ dens.

What’s the big deal with leaving little Prince George home, where he will be safe and sound as long as Carole confines her smoking to the outdoor Kensington breezeway?

No dead nurses, no Djs, and no devouring dingos.