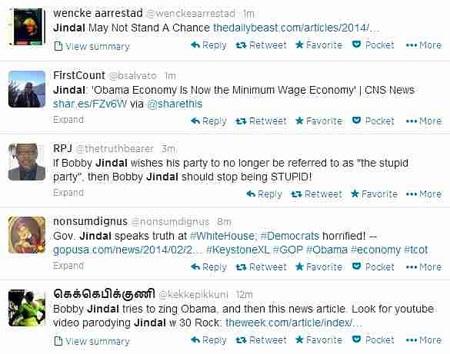 If Twitter is the country’s thermometer, the debate over Jindal ‘s comments at the White House on Monday is hitting boiling. However, so far, based upon the volume of negative comments to date, Jindal’s PR machine needs more firepower.

Yesterday, President Obama met with US governors in a National Governors Association meeting in the White House. Supposedly, the meeting had been focused on bipartisan cooperation, but that is not the impression Gov. Bobby Jindal gave when he stepped out on the White House grounds with a group of other governors for a press conference.

Jindal stated that he has made suggestions to Obama on how he can use executive decisions to complete the Keystone Pipeline and increase drilling and leasing activity on federal land. Jindal said that Obama's executive order to raise the minimum wage was a “white flag,” that the Obama economy is a “minimum wage economy,” and that America can do better than that.

Connecticut Gov. Dannel Malloy decided to answer Jindal. He wanted to make clear that there are, of course, differences in the group of governors, and that not all of them agreed that completing the Keystone Pipeline is going to boost the economy. However, Jindal's statement was the most partisan statement he had heard so far. Furthermore, Malloy did not understand Jindal's “white flag” reference: “I don’t know what the heck was a reference to white flag when it comes to people making $404 a week. I mean, that’s the most insane statement I’ve ever heard, quite frankly.”

In his short response to Malloy, Jindal said that if Malloy thinks his statement was partisan, he will make sure to make more partisan statements. Later, Malloy told TIME: “Here’s a guy who didn’t come to any of the meetings except this one today, and has the nerve to pull that stuff on everyone—ten feet from the West Wing. He doesn’t pay his dues to the organization, he doesn’t come to the meetings of the organization, and then he wants to swing for the fences for obviously political reasons. I didn’t mind pushing back.”

When asked about Malloy's accusations in an interview on Fox News, Jindal did not comment directly on them, but instead focused on criticizing Obama. He said that the U.S. do not have kings, and if the President thinks that he can interpret the Constitution and apply the law, he is wrong. Governors can speak up when they think the President is wrong. Jindal also said that Obama is standing in the way of Americans pursuing the American dream.

The Jindal/Malloy episode has been subject to a lot of attention and discussion in the media. According to senior editor of The Week, Peter Weber, it's hard to interpret Jindal's performance as anything else than “a strong signal that he's in for 2016.” He points out that “if Jindal wants to grab the attention of the primary-voting Republican base, attacking Obama right outside his house is an obvious way to go about it.”

Diane O'Neal: Bobby Jindal has done a great job for LA. If we could just get rid of Landrieu.
HearThemComing: He's right! Bobby Jindal: Why Doesn't Obama Use His Pen and Phone to Laser Focus on Creating Jobs?
WE THE CITIZENS: If Only All Republicans Talked Like Bobby Jindal

However, a majority of the users lash at Jindal:

Shuji: Just thought Mayor Ray Nagin was Bobby Jindal.
Brandon Watkins: Jindal is a moron. A petty singleminded moron at that. Why should people in your state not make more? Tell them your reasons.
Chico Delainky: Gov. Bobby Jindal said raising the minimum wage is a bad idea. He doesn't mind Louisiana being a huge welfare state.
Jenny Barber Valois: It's so embarrassing for Louisiana, I cringe every time he's in front of a microphone.
Bill Wright: How can Jindal be taken seriously on anything. He said GOP should stop being stupid. It should start with him.
Donna Brazile: Louisiana has the third highest rate of poverty in the country, so why did Gov. Bobby Jindal attack raising the minimum wage?

More in this category: « Transparency Advocate Adley Does a 180 with Senate Bill 79 Will CNN Fox Up after Piers Morgan debacle? »
back to top