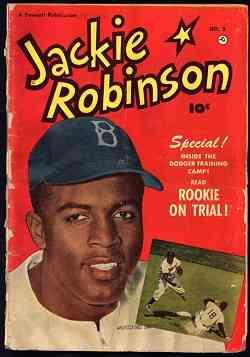 Now I’m a diehard baseball fan. I grew up in St. Louis and lived next door to the general manager of the St. Louis Cardinals, the great former Cardinals shortstop Marty Marion. I was in his box the Sunday afternoon back on May 2, 1954, when Stan the Man Musial hit five home runs on the same day in a doubleheader. All this week, I’m in Tampa, Florida for spring training and will watch five major league ball games, including a trip to the home stadium of my perennial favorite, the New York Yankees.
The problems of major league baseball have often served as a mirror image of the problems facing America. Its history is both a reflection of this country’s fears and ignorance and its hopes and promises. Like almost any other cultural phenomenon of such prominence, baseball has served as solace and as a poke to our conscience.
In 1948, the major leagues faced the problem of segregation earlier than the politicians in Washington DC did. Jackie Robinson broke the color barrier by playing for the Brooklyn Dodgers and won the rookie of the year award in his first season. It took court cases and sit-ins to get the attention of our political representatives to follow suit. Today, the use of steroids and other performance enhancing drugs undermines the image of baseball players as wholesome examples for American youth and is the focus of an investigation in the nation’s capital, with the possibility of its legislation.
A few years back, the Tampa Bay Rays were the Cinderella team that went from “worst to first,” winning the American League pennant. Maybe it has something to do with their name. They used to be called the “Devil Rays” and their record was terrible. As soon as they dropped the word “Devil,” they became victorious overnight. Is it baseball pure and simple, or is the Religious Right involved?
Maybe it’s impossible to get away from campaigns and politics by focusing on spring training in baseball, but I’m going to give it a shot. The Fox network will carry many major league games this season. You know — as in “Fox News.” In the National League, everyone, even the pitchers, get an equal chance to bat. Will Fox say that the National Leaguers are socialists? Will their commentators argue they should call some home runs out if they are too far to the left?  And I guess you can’t blame the Democrats from bemoaning that every time someone steals a base, they get reminded of the 2000 presidential election.
There is also a lesson to be learned from Babe Ruth as Congress considered limiting executive pay and bonuses of corporations who received bailout money. When the Babe was asked how he could justify making more money than the President, he shrugged off the question by answering, “I had a better year.”
I suppose one of the biggest differences between these two spectator sports is the sense of optimism that baseball brings every spring. The crack of the bat, a pop fly against a blue sky, and the green grass seem to offer a sense of renewal. It harkens back to the essence of youth and heroes of the past, and you feel that almost anything is possible in the coming season.  But in today’s political climate, there is little thought of great statesmen and principled political figures.  Political courage today is too often defined by poll watching and sticking a wet finger to the wind.
So when the TV remote offers a choice of politics or baseball, I’ll choose the great American pastime. It’s baseball hands down. See you next week back in Louisiana.
********
“The difference between politics and baseball is that in baseball, when you are caught stealing, you’re out.”
Ron Dentinger
Jim Brown’s syndicated column appears each week in numerous newspapers throughout the nation and on websites worldwide. You can read all his past columns and see continuing updates at http://www.jimbrownusa.com.  You can also hear Jim’s nationally syndicated radio show each Sunday morning from 9 am till 11:00 am, central time, on the Genesis Radio Network, with a live stream at http://www.jimbrownusa.com.
Print Friendly
- See more at: http://www.jimbrownla.com/blog/?p=11413#sthash.iWr9xkIu.dpuf