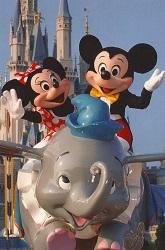 Dumbo: Mr. Disney, I know you hired me as an elephant, and I do have a trunk and big ears and kind of look like an elephant, but I think I should be paid like an eagle. Disney: Dumbo, that’s the dumbest thing I ever heard of. You aren’t an eagle. An eagle is the symbol of our country, the epitome of bravery and courage. You are an elephant.

Dumbo: But how many elephants do you know who can fly? (To make his point, Dumbo flies around the room, buzzing Disney once or twice before returning to a soft landing at the negotiating table.) Let me ask you about some of your other stars. Was the Little Mermaid a fish or a girl? You didn't go to that movie to see her fins! Do you pay Roger Rabbit union scale? No, he makes more money than the Easter Bunny. Does Donald get paid like a duck? Donald was the original Duck Dynasty! And what about Mickey Mouse? Disney: Don’t go there, pachyderm. I knew Mickey Mouse, and you are no Mickey Mouse. He was a versatile actor! Could do a lot of things!

Dumbo: And when is the last time he played a mouse in a movie? He was restricted by definitions until he broke the stereotype. He was versatile, valuable and you won big with him! And you are paying him accordingly. Disney: And you are still an elephant! (Dumbo, exasperated, dips into his briefcase with his trunk and pulls out a thick document.)

Dumbo: Mr. Disney, I have in my trunk a copy of the most recent CBA, the Cartoon Bargaining Agreement, and I open it to Section 35, paragraph 12, which clearly states: “Character’s salary will be based on the role at which he participated in the most scenes during the prior cartoon year.” Since most of my scenes are at an altitude where I am soaring above the tallest buildings, I should be paid like an eagle. Disney (rubbing his chin, then scratching his head): But there are no eagles in any Disney movie. There are a lot of Beagles! There’s Bugle Beagle and Burger Beagle in Duck Tales. There’s even the Beagle Boys. If you don’t like that, we could pay you like Dalmatians. There were at least 101 of them.

Dumbo: But they were all cast members, bit players, the seven dwarfs, not stars. I am a star, and I want to be paid like a star! Disney: Look, big ears, what you are asking is for me to create an entirely new character group. Sort of a hybrid that does not exist, and I am not going to set the precedent. Why, the Simpsons and South Park people would kill me!

Dumbo: Well, I guess I'll see you in the grievance hearing. Did you know the hearing officer is the Lion King? Disney: Wait a minute! The Lion King is not a neutral! I protest! Where’s Hercules when I need him?

Jim Miller's book, "Where the Water Kept Rising," is available at Amazon.com and at his website: www.JWMillerSports.com

More in this category: « Hey, Louisiana: Medical Marijuana Commercial Rolls Out in New Jersey Who leads in Louisiana Senate, Congress campaign cash race? »
back to top