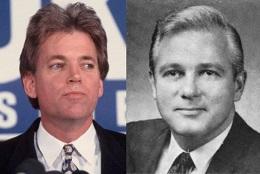 In his 1983 gubernatorial campaign, Edwin Edwards once remarked that the only way that he could lose to the Republican incumbent, Dave Treen, was if he were caught in bed with “a dead girl or a live boy.” Thirty-one years later, that analogy aptly describes his chances of actually winning the 6th Congressional District race this fall.

Those of us who are serious sport fans have endured the spectacle of the superstar athlete who didn’t know when to quit. Several examples come to mind. How painful, for example, it was to watch Muhammad Ali, well past his prime, trying to challenge Larry Holmes for the heavyweight boxing title. It was a fight that should have never taken place, but it did – and it was brutal to watch. More recently, Michael Jordan un-retired for a second time, leaving an executive job with the Washington Wizards to chase his former glory in the NBA spotlight. Playing with teammates almost half his age, Jordan was a mere shell of his former self. Finally, Brett Favre’s final season as quarterback of the Minnesota Vikings also proves the folly of what happens to athletes who do not know how to gracefully exit the stage.

Edwards’s candidacy for Congress resembles the metaphor of a pathetic spectacle of an athlete past his prime who seems genetically incapable of understanding when enough is enough.

Ironically, one of the traits that Edwards had been admired for – his ability to accurately assess the electoral landscape – appears to have deserted him in his old age.  The best example of this trait occurs in the immediate aftermath of the 1987 gubernatorial primary – after Edwards, politically battered after enduring two corruption trials, finishes a surprising second  to Buddy Roemer and Congressman Bob Livingston swiftly endorses Roemer after he finishes a distant third. Edwards concludes that his prospects of prevailing in a runoff with Roemer are slim and surprises everyone by quitting the race that very night. Many political observers credit Edwards’s swift concession to Roemer on Primary Night in 1987 with paving the way for his comeback in 1991 (because he denied Roemer an electoral mandate as governor).

But the Louisiana that elected Edwin Edwards governor four times is a much different state politically than the one that he seeks office in today.  Politicians like Mike Foster, Bobby Jindal, and David Vitter command large majorities among the same demographics who gave their votes faithfully to the likes of Huey and Earl Long and then Edwin Edwards over the last two generations. Edwards engrafted newly enfranchised African Americans into the old Long coalition of Catholics, Cajuns, and Big Labor into a powerful political machine that dominated Louisiana politics throughout the 1970’s.  The Long-Edwards style of populism depended on oil and gas revenues providing the principal source of state revenue to fund their brand of redistributive politics.  However, the Oil Crash of the 1980s crashed the party that was Louisiana politics, exposing our state’s long-term overreliance on  its mineral resources and its woeful underinvestment in education and a diversified economy. The crash occurred at the same time that the ex-governor endured two corruption trials. Although they did not result in his conviction, these prosecutions permanently damaged his reputation.  Instead of challenging the voters of Louisiana in the midst of its perpetual budget crises to think hard and creatively about what kind of future they wanted (and to figure out how to pay for it), Governor Edwards instead  pushed riverboat gambling and casinos as “quick fixes” to the state’s money troubles. While the governor’s capacity to argue for a truly progressive agenda might have hampered in any case during the 1980’s because of his legal difficulties, Edwards got what many politicians in similar circumstances often do not receive: a genuine second chance when he won the so-called “Race from Hell” after defeating David Duke.

Despite being presented with an opportunity to reinvent himself, Governor Edwards squandered his final term. After promising not to push for a land-based casino in New Orleans (in order to win over Roemer supporters and good government groups prior to the runoff election), Edwards wasted no time breaking that promise. Still seeking for a “quick fix” to Louisiana’s problems, Edwards made the establishment of the new casino his top priority during his first legislative session as governor. Despite his best efforts, he could never restore the economic prosperity of the go-go 1970’s. However, he did spend an inordinate amount of time in his final term manipulating his position as governor in order to enrich himself and his friends. It finally caught up with him with his 2000 conviction for racketeering, conspiracy, and money laundering.

This is not to say that Edwards did not go some good while he was governor. But it also undeniable that a major part of Edwards’ legacy is the fact that he squandered much of Louisiana’s wealth and resources in ways that still have consequences fo  the plight the state still finds itself in. If Louisiana had invested its vast oil revenues in higher education, building a first class K-12  educational system, and other economic development initiatives while we had the money, our state could easily be one of the most progressive states not only in the South, but in the nation. Instead, his shenanigans have given a black mark to populist politics – the idea that government ought to be on the side of common people instead of wealthy corporate interests. His legacy has made it easy for Republicans to lampoon and caricature a noble political philosophy in order to buttress an ideology that justifies social meanness under the mask of comparatively benign labels of “small government” and “low taxes.” To be sure, it is not fair to place all of the blame on Edwards for Louisiana’s perpetual position at the top of all of the nation’s bad lists and the bottom of all the good lists. But, without a doubt, Edwards did more than his share to sully the state’s national reputation.

What, other than sheer vanity, could make Edwards possibly believe that he can win an election in this very Republican district?  It is the very real perception that his brand of politics has failed the state that is largely responsible for the fact that the 6th District has been drawn in such a manner that the Democrats have no realistic chance to win. Why would he make it so easy for the Republicans to campaign against the “politics of the past?” The Republican party will have a field day reminding the voters of the 6th District of the ex-governor’s flaws and why, in their view, their policies represent the future.

Moreover, his campaign strikes me as deeply selfish. While this district represents clearly unfavorable political terrain for the Democrats, the party badly needs to develop new leaders and new voices who have the potential to offer leadership to deal with the state’s problems. Elections for open seats provide perfect opportunities for this process to take place. However, instead of allowing the Democratic party the chance to develop badly needed new voices, the former governor instead “sucks all of the energy out of the room” toward a delusional, farcical campaign that has no realistic chance of succeeding. Edwards’s candidacy represents a counterproductive distraction to a party still struggling to overcome the damage that his legacy has inflicted on their image with the voters and their need to convince them that the Democrats offer an attractive political vision for the future.

Worst of all, Edwin Edwards’s campaign for Congress brings more unwelcome attention to the state of Louisiana. Our state still suffers from the long term impact of decades of political corruption. Even years after the most colorful political scandals of our past, it takes a long time for people outside the state of Louisiana to give us the benefit of the doubt when we insist that we are better than the caricature of who we are. Louisiana’s poor performance on a vast array of economic and social indicators of well being drives a simplistic national narrative that our state is an incurably corrupt, backward,  “banana republic” which, other than being the nation’s playground for “food, family, and fun,” should otherwise not be taken seriously. We saw a very real world example of this when many members of Congress used our past against us when Louisiana sought help from the federal government after Hurricane Katrina and Rita. Detractors openly criticized proposals to provide generous aid to Louisiana, warning that “they’d steal the money anyhow.” The national media will have a field day reporting on the Edwards campaign for Congress and on Louisiana’s supposed inordinate toleration for political corruption, thereby perpetuating this old, tired narrative that continues to dog the state’s image like a ball and chain. This will be especially true if (as many suspect) he garners enough support to make it into a runoff. It will be a reincarnation of the Edwards-Duke “Race from Hell” again – only this time, Edwards will be on the losing end.

But Edwin Edwards won’t be the only loser. Louisiana loses as well. Our state badly needs to move on. But Edwards won’t let us. And so, the circus begins.

More in this category: « Edwin Edwards vote for the kook? Webcast today Bayoubuzz Webcast: Edwin Edwards, are you kidding? »
back to top