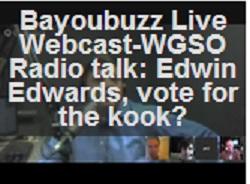 Yesterday, former four-term Louisiana governor and convicted felon Edwin Edwards announced that he is running for Congress. Today, Bayoubuzz publisher Stephen Sabludowsky joined Jeff Crouere, Ringside Politics host; Jim Brown, Louisiana legislator, friend of Edwards and author of his biography; and Tyler Bridges, The Lens writer and author of Bad Bet on the Bayou: The Rise of Gambling in Louisiana and the Fall of Governor Edwin Edwards in a live webcast to discuss the implications of the announcement. As Sabludowsky pointed out at the beginning of the talk, it is important to both Louisiana and the nation.

Edwards's announcement caught many by surprise, but Jim Brown was not one of them. He pointed out that rumors has been circulating for weeks. Also, he believes that Edwards is convinced that he can win. If he wasn't, he wouldn't run. Concerning his actual chances of winning, Brown is more doubtful. The sixth district is traditionally a Republican district. However, Cajun areas have recently been included in the district. The question is whether or not Edwards's obvious charisma is going to transfer into votes in these areas. Crouere brought up a scenario that a caller had presented previously – Edwards winning in the first primary because the Republican candidates will beat each other up in the race. Brown, however, does not see that scenario as likely to play out.

Unlike Brown, Tyler Bridges was surprised by Edwards's decision. He sees Edwards's odds of winning as low because the district is known to be dominated by the Republicans. Sabludowsky agrees, but also emphasized that Edwards is not despised by many Louisianians like other Democrats, such as President Obama, are. Sabludowsky is more curious about the question of why Edwards is running in the first place. Crouere suggested that the answer lies in Edwards's thirst for the limelight, and Brown confirmed this. He said that Edwards thrives in public life, and that people, whether they vote for him or not, are attracted to and interested in him.

Crouere asked Bridges, who has studied Edwards, if Congress is a natural fit for Edwards, or if he belongs in state politics. Bridges finds the latter more likely, given that Edwards served three terms in Congress in the 1960s and did not enjoy it. What he really wanted was to become Governor. Like Sabludowsky, Bridges is wondering why Edwards is running--but he has a theory: that the choice to run is an act of personal redemption, assuring that his last public act was not his conviction and jail time. Brown thinks that there's definitely an element of redemption and rehabilitation of his public image and legacy in his race for Congress. Another motivational factor is his wife, who is very engaged in politics and runs the social media side of Edwards's campaign.

Some callers also raised their opinions in the webcast. Mike from Harvey does not believe that Edwards has a shot to win. However, he also believes that his race is not about winning; Edwards wants to start a super PAC so he can have another income source. Rhonda from Mid-City admitted that she likes Edwards, but that electing him, considering that he is a convicted felon, would be like “opening a can of worms.” She finds it strange that people so easily accepts and forgives Edwards while so many other felons face difficulties when they are released from jail. In relation to Rhonda's concern, Crouere asked Bridges what a possible election of Edwards would do for Louisiana's image. Bridges thinks that for some people, it might serve to confirm Louisiana stereotypes.

Like Rhonda, Sabludowsky is also concerned about Edwards's criminal past. However, he also brought up that another political figure in Louisiana, US Sen. David Vitter, also has a skeleton in the closet. Republicans are bashing Edwards, but at the same time, they are voting for Vitter. Sabludowsky drew attention to the fact that Vitter refused to talk to the press about his name appearing on a list of phone records of the prostitution service “D.C. Madam.” Had Vitter been convicted of buying prostitution services, he would have been, like Edwards, considered a felon. Vitter was never on trial because the criminal case had prescribed due to Statute of Limitations, but he said that he was going to take the fifth amendment. Crouere pointed out that Vitter was never convicted and that the public doesn't know the story, but Sabludowsky views that as an even stronger reason for Vitter to come out and tell the truth and for the GOP to ask questions rather than merely using the Edwards campaign as a way to denounce Democrats.