Edwin Edwards, the Silver Fox Is Back in the Ring 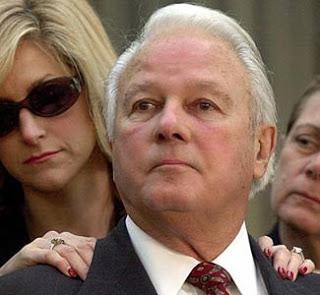 It shouldn’t have surprised anyone paying attention to Louisiana politics. Former Louisiana Governor Edwin Edwards made it official this week. He will be a candidate for the U.S. Congress in the coming fall election. The political prognosticators say the congressional district has been gerrymandered by the Louisiana legislature to favor a republican candidate. Edwards feels otherwise.

Edward Washington Edwards, the Silver Fox, has run for office in twelve different elections, and won eleven times. That’s what he does. EWE is a consummate politician who loves the political limelight. He would have run for governor again if he could, but state law prohibits him from doing so. He was elected four times to congress back in the 1960s. Now, for a variety of reasons, he wants to go back again.
The 6th district meanders from east of Baton Rouge, through parts of the capitol city, then down both sides of the Mississippi River to deep South Louisiana in Lafourche Parish. It was cut up to protect an incumbent republican, and it’s a mishmash of irresponsible legislation. Louisiana legislators should be held in contempt for cutting up this and the other congressional districts throughout the state in such a reckless way.
This district is rock solid republican, so that it’s almost out of the question that a democrat can win. Edwards is quick to quote Billy Joel’s song, “Only the Good Die Young,” in saying, “You didn’t count on me!” And he could be right. Edwards could be the only democrat that has any chance of winning the 6th district.
At his announcement on Monday, Edwards was asked about whether age would be an issue. He is 86 and will be 87 on Election Day. His response? “I’m not going to make age an issue. I’m not going to point to how young and inexperienced all my republican opponents are.” Touché! He also pointed out that there is a republican candidate running for congress in South Carolina who is one hundred and one. “I will have served seven more terms before I get that old,” Edwards retorted.
What about not being able to get much done because he would be new a member with no seniority? “It’s a new day in Washington,” he said. “Look at the three leading candidates for the republican presidential nomination. Three U.S. senators (Rubio of Florida, Cruz of Texas, and Paul of Kentucky), all of them have been in Washington less than two years.” He also pointed out that he worked with republicans when he was in congress back in the 60s, and wants to continue to do so – a democrat wanting to work with republicans — something that doesn’t happen too often in Washington.
The big question mark here — can he win? It all may come down to the transformation of charisma into actual votes. Edwards is a political phenomenon. Whether voters hate him or love him, most are captivated by his ability to entertain. They laugh at his wit and love to hear him talk. But how many of those who find him entertaining will vote for him?
He can go down the bayou towards Thibodaux and garner republican Cajun voters that no other democrat could get. The question is: will he be able to entice enough of these normally republican voters to vote for him?
With a 32-year-old wife and a new baby at eighty-six, many would think the former governor would be otherwise occupied. But he’s looking for one more grasp at the golden ring. And maybe a bit of redemption. Whatever his reasons, don’t count the Cajun Prince out.
********
“In this day and age where liberals and conservatives are at each other’s throats, it’s nice to know there are still places like Louisiana where they view politics purely as entertainment.”
Ned Stark
Peace and Justice
Jim Brown
Jim Brown’s syndicated column appears each week in numerous newspapers throughout the nation and on websites worldwide.  You can read all his past columns and see continuing updates at http://www.jimbrownusa.com.  You can also hear Jim’s nationally syndicated radio show each Sunday morning from 9 am till 11:00 am, central time, on the Genesis Radio Network, with a live stream at http://www.jimbrownusa.com.
- See more at: http://www.jimbrownla.com/blog/?p=11534#sthash.C1J4CavU.dpuf

More in this category: « PAR Reviews Use of Campaign Funds New: Bayoubuzz's Edwin Edwards Portal »
back to top