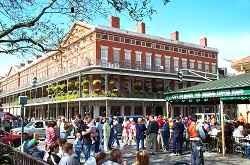 With the French Quarter Festival scheduled less than a month from now, organizers, vendors, artists, and volunteers are preparing for a surge of excited visitors. French Quarter Fest is the largest free music festival in the U.S. Last year, it hosted more than 560,000 visitors. The 31st fest is taking place from April 10 to April 13, 2014.

French Quarter Festival and Timecode: NOLA are partnering to organize this year's film festival, which is free and open to the public. The movies will be screened in Le Petit Theatre. The films focus on New Orleans music, neighborhoods, culture, and dialects, and include Lily Keber's documentary Bayou Maharajah: The Tragic Genius of James Booker, Richard Barber and Andre Lambertson's The Whole Gritty City, and Stevenson Palfi's Piano Players Rarely Play Together. The majority of the featured films are by local creators. After each screening, there will be a Q&A session with the director and/or the cast.