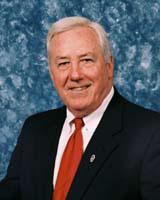 "Ernie and I were once competitors in an election, but he proved to be a true friend and conservative ally through the years," Little said. "Through his many years of service as a public school teacher, Ernie earned the love and respect of thousands of Lafayette children. He was a true gentleman and I am honored to have called him friend. My prayers and thoughts are with Shirley and the entire Alexander family during this difficult time."

Republican Party of Louisiana Vice-Chairman Charlie Buckels' statement on the death of Alexander:

“Ernie Alexander, at both the state and local level, was one of our most effective and respected Conservative Republican leaders,” Buckels said.  “His integrity should be a model for all public officials.”

Funeral services will be held at 11:30 a.m. on Friday at the St. Pius X Catholic Church in Lafayette. Visitation will be held on Thursday from 4 p.m. until 8 p.m. and on Friday morning beginning at 8 a.m.  at the Delhomme Funeral Home on Bertrand Drive.

Alexander is survived by his wife of 57 years, Shirley Champagne Alexander, and by one brother, John Arlen Alexander and his wife, Carolyn Kimball Alexander.