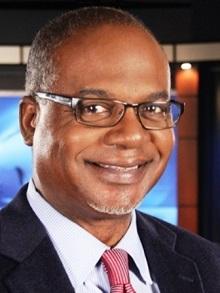 The WDSU interview with Norman Robinson and Edwin Edwards, conducted in Edwards’ home, was classic television.

For one, Robinson, who will be retiring later this spring from a extraordinary career in television news interviewed Edwards, who is coming out of retirement at age 86, after coming out of federal prison, and is now running for US Congress in a conservative district in Louisiana, perhaps the most conservative state in the nation.

The interview on the WDSU website is segmented into two parts.

Here is a rough summary of the WDSU interview. Please review and watch the TV interview in its entirety:

Part 1
Norman Robinson, WDSU Hot Seat at the home of Edwin Edwards.
Robinson noted the latin sign on his desk saying Illegitimi non carborundum. Edwards said that it means "Don't let the bastards grind you down" and that it is a tribute to himself. It’s one of the reasons why he keeps going, and why people can’t stop him. Robinson began with addressing “the elephant in the room:” Why would voters be willing to elect a convicted felon to Congress? Edwards answered that he understands people's concern, but that he “assuming he is guilty,” has paid “a heavy price.” He said he was not charged with bribery, using his office to favor anybody, or messing up with riverboat licenses like many people think. I all happened after he left office.
Robinson noted that “close friends testified against you”.
Edwards emphasized that the people who testified against him were convicted felons who made deals with the federal government. One of them is still in prison. The U.S. Attorney at the time later served as District Attorney, ran that office in shambles, and resigned in disgrace. The judge was, according to Edwards, on oxycontin during the trial and therefore did not have his full mental capacity. Edwards, however, said: “That doesn't mean that I'm innocent. But it had nothing to do with me being Governor. I challenge anyone to look at the court record and find any reference to anything I did while being Governor.”
Robinson asked Edwards why he thinks he has a change, given that the sixth district is highly conservative and Republican. Edwards answered that people nowadays look at a candidate based on his capabilities and program, not his party. The district, according to Edwards, evenly comprised of Democrats and Republicans even though it's a conservative. He also said: “Where else are you going to find someone with my experience and knowledge?”
Robinson brought up that some people say that Edwards used his previous period in Congress as a stepping stone for Governor, and that he didn’t show up for meetings. Edward answered: “I showed up enough to be re-elected. I must have done something right.” As far as the controversial bills, Edwards said “I was there and voted.”
Robinson then turned to the present: “At 86, what do you think you can accomplish?”
Edwards argued that he is better suited than most people to to look at a case from both sides and to compromise. He doesn’t expect to change things overnight, but he is going to make his best effort and make his voice heard.
Robinson asked Edwards how things have changed since last time he was in Congress. Edwards answered that people today are more independent. They think for themselves instead of trusting so-called leaders, and that is a positive change. The worst part of politics today, Edwards said, is raising money: “I welcome any contribution that anybody has to give me legitimately. I'm abiding by all the new rules. Before we had all this rules, you could do what you pleased.”

Part 2
Robinson began part 2 by reading an excerpt from a somewhat unflattering column that James Gill, a friend of Edwards, wrote: "Edwards's judgment is a little suspect these days as he demonstrated in agreeing to take part in that goofy reality TV show that did not turn into a major embarrassment for the state only because no more than a handful tuned in."
In response, Edwards wanted to get across that “there’s nothing real in a reality show.” He also said that the reports from Louisiana were really favorable, and that he had told the producers beforehand that the rest of the nation would not be interested.
Robinson asked: “What do you think of Gill's characterization of your ‘suspect judgment’?” Edwards answered “I hope to prove him wrong by winning the election.” He also stated that he gets along fine with Gill, and that Gill even visited him in prison. He described that Gill writes a favorable article about him one day and then an unfavorable one the next day to counter it.
Robinson stayed with Gill’s columns and said that Gill argued that Edwards still craves the limelight. Edwards disagrees with Gill; he said that he’s simply dealing with the limelight very well. When you’re in public life, Edwards said, you’re in the limelight all the time. You don’t crave it, but you don’t worry about it either. Most people except James Gill, he said, know that no one is dealing better with the limelight than Edwin Edwards.
Robinson moved on to another statement made by Edwards. The executive director of the Louisiana Republican Party said that Edwards would turn the race into a circus atmosphere.
Edwards responded that he “does not see that happening.” He thinks that the race so far has been about different opinions. For example, Edwards believes that Jindal should have accepted the Medicare provisions. “It wouldn’t have cost us a penny,” he said, because it would be paid for by the federal government for the first three years, and then 90% of it would have been covered after that. Jindal “would have been gone before he had to put up the first nickel.” To Edwards, it’s a mystery how Jindal “can turn his back on sick people,” something that Edwards would never do. In that regards, Edwards believes, the state is heading in the wrong direction under Jindal. Here is something else we need to take a look at, Edward argued: Jindal was all for an $80 million to study the feasibility of a high-speed transit system between New Orleans and Baton Rouge, but he then turned it down. The traffic between the cities are growing and will continue to grow. Edwards doesn’t believe in a new traffic system being developed in his lifetime, but change should start before it’s too late. Robinson asked: “You say it's not going to happen in your lifetime; do you think about your own mortality?” Edwards responded that he does; any reasonable human being does. He said: “I try to live right. On the way to heaven or hell, wherever I go, I don't think I'm going to meet anyone who can say that I mistreated them. I always try to help people, even people who have done me bad.”

Edwards asserted that he is suited for this position because he knows Louisiana. He and his whole family live in the sixth district, and he is familiar with all the issues down there. He hopes that people will see that if something needs to be done, he will do it. Robinson asked: “How do you think you will fit in in Congress?” Edwards responded that he doesn’t know whether or not he is going to fit in but that he is not going to be “one of those mean-spirited, nasty fellas.” He also said: “I'm simply running because I wanna help people. I believe the gov'ment is made to serve people, not be in their way.”
The interview ended with a discussion of the friends who have tried to talk him out of running. Edwards said that their arguments were that he has a young and beautiful wife and that he ought to take it easy at his age. Edwards, however, said that he’s doing what he wants to do, and that golfing and fishing is not for him. Robinson finally brought up the recent poll that shows Edwards up front in the race. Edwards said that the poll didn’t surprise him because he’s the only one running who has any experience and maturity. He said: I don't criticize the other candidates for being young and inexperienced, but they criticize me for being old and experienced.”

More in this category: « Alex Andreae on JFBConnect, Social Media, and the WWW Future Jim Miller: Saints, LSU, UK and hope summers eternal »
back to top