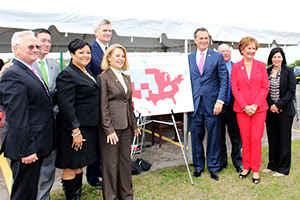 In honor of this year’s New Orleans Entrepreneur Week, a new business mentorship program called “20/20” launched today, March 24th, to empower as many as 20 local start-ups or businesses over 20 days by providing free assistance with developing marketing strategy. The goal of 20/20, which will help participants view their marketing more clearly, aims to further the week’s mission of supporting and scaling entrepreneurship and innovation in the city. Bookings are being accepted at TwentyInTwenty.YouCanBook.Me. Local marketing and public relations firmHEROfarm is sponsoring the initiative.

Beginning today, March 24th, any interested business, whether a start-up or long established, can sign up for one of the 20 slots at the initiative's websiteTwentyInTwenty.YouCanBook.Me. The program, which will officially commence onMonday, March 31st and continue for twenty days,  aims to assist one New Orleans area business per day, free of charge, with developing cohesive and focused marketing efforts. Availability is limited and on a first come, first-served basis. Any business may signup to participate, however, HEROfarm reviews all submissions and maintains final discretion. New Orleans Entrepreneur Week runs fromMarch 22-28, 2014.

HEROfarm is an award winning, New Orleans born marketing and public relations agency that follows a social mission focused philosophy of “Do great work for good people.” The agency, which has been featured by Forbes and Fast Company, focuses on working with small-to-mid-sized businesses and donates at least one pro bono campaign per year to a non-profit. HEROfarm has served on numerous marketing boards across Greater New Orleans, including for the American Cancer Society, March of Dimes, Big Brothers Big Sisters, Boy Scouts of America and Tulane Public Board of Advisors. The International Association of Business Communicators named the agency “Business of the Year.”

Principals Reid Stone and Shaun Walker, who founded the startup agency five years ago at the height of the recession, have been recognized with numerous entrepreneurial awards, including Under30CEO.com’s "Top Young Entrepreneurs to Watch in New Orleans," Gambit’s 40-under-40, Southern Alpha’s "Top People in the New Orleans Start-up Scene" and YFS Magazine’s "Top 20 Young Entrepreneurs.”

Today, Greater New Orleans, Inc. joined several parish presidents to mark the passage of the Homeowner Flood Insurance Affordability Act. The group also announced next steps for the Coalition for Sustainable Flood Insurance (CSFI), the national partnership established by GNO, Inc. to amend Biggert-Waters, to ensure efficient implementation and a successful reauthorization of the National Flood Insurance Program in 2017.

“The Homeowner Flood Insurance Affordability Act makes economic and moral sense,” said Michael Hecht, President and CEO of Greater New Orleans, Inc. “The success of this effort is due to the tireless leadership of our Louisiana Congressional delegation, particularly Senator Mary Landrieu, Senator David Vitter, Congressman Steve Scalise, Congressman Cedric Richmond, and Congressman Bill Cassidy as well as several parish presidents whose commitment to the future of their parishes is unwavering. GNO, Inc. looks forward to working with the Coalition for Sustainable Flood Insurance along with national stakeholders to ensure flood insurance remains viable permanently. ”

In the coming weeks, the Coalition for Sustainable Flood Insurance will evolve its effort by creating a 501(C)6 entity and establishing a national board of directors that will include industry stakeholders, community stakeholders, and geographic diversity. CSFI’s mission will be to ensure that flood insurance is affordable and sustainable for the nation.

Jefferson Parish President John Young said, “The people of Louisiana scored a major victory last week when President Obama signed The Homeowner Flood Insurance Affordability Act into law. His signature is the culmination of a true bipartisan effort towards an affordable and sustainable National Flood Insurance Program and ends years of uncertainty for home and business owners of Jefferson Parish. I would like to thank the citizens of Louisiana for this grassroots effort and the entire Louisiana federal delegation for leading the charge in this fight.”

Lafourche Parish President Charlotte Randolph said, “This action is essential to the future of a solid flood insurance program for Lafourche Parish residents as well as millions of Americans. We now have a realistic foundation from which to build, allowing for true flood maps accounting for all structures that can reduce our risk. And time to complete more.”

St. Charles Parish President V.J. St. Pierre said, “I want to thank our entire federal delegation for their hard work to get this bill passed. St. Charles was the first town hall in the country to feel the effects of Biggert-Waters, we are excited to know that our residents will be able to stay in their home and keep the American Dream alive. We look forward to working towards a sustainable and affordable flood insurance program. I want to extend my deep appreciation for my staff, the entire delegation, and especially the citizens of St Charles.”

St. James Parish President Timmy Roussel said, “"With President Obama's signing, we have accomplished an astonishing victory for our homeowners, business community, and developers, as well as our Parishes and counties across this great nation. Victory was made possible because of the tireless, persistent public servants, whether in public office or serving with an organization, giving of themselves to achieve the remarkable end result. Thanks to GNO, Inc. for their outstanding leadership role.”

St. John the Baptist Parish President Natalie Robottom said, “We are extremely pleased that President Obama signed the Homeowner Flood Insurance Affordability Act into law so quickly. This is a huge victory for St. John the Baptist Parish, Louisiana and the nation. Our coalition will continue to work to ensure the law is properly implemented and our communities are protected.”

St. Tammany Parish President Pat Brister said, “It was a difficult fight, but we can be proud that when we stand up for what’s right, good reforms can come about to protect families, as well as keep the NFIP solvent. This important victory for St. Tammany, Southeast Louisiana, and all Americans will allow homes to be bought and sold, re-invigorate the housing market and spur development. This reform will keep flood insurance affordable, and continue to protect families from the devastation of disasters, instead of pushing them into bankruptcy.”

Terrebonne Parish President Michel Claudet said, “The signing of this bill marks the end of a long journey. Had this bill not been passed and signed into law it would have been the end of our way of life in South Louisiana as we know it. Thanks to our Congressional delegation, the Parish Presidents of our region, GNO, Inc., and countless others.”

Since May 2013, GNO, Inc. has led national coalition of business and elected leaders, now including over 200 business, trade associations and local governments in 35 states, in order to address harmful changes to the NFIP. As founders of this Coalition for Sustainable Flood Insurance (CSFI), GNO, Inc. works to align national business interests for the good of their local communities and the national economy.

The law includes proposals originally suggested by the Coalition, including the reinstatement of grandfathering and capping premiums at one percent of the real estate policy value. The legislation also removes the property sales trigger, caps annual rate increases at 15 percent, and refunds policyholders who purchased homes and were subsequently charged higher rates.

Forty chambers of commerce and industry organizations are working together to reform Louisiana’s lawsuit climate.

Who Are Our Partners?

Why?
America maintains the most expensive tort system in the world to the tune of $865 billion every year, yet studies show victims receive less than 15-cents of every dollar.  Within this broken system, Louisiana ranks #7 nationwide on the Tort Activity Index, #49 for our lawsuit climate, and #2 on the Judicial Hellholes list.

Excessive litigation affects the economy in numerous ways, but first and foremost, by increasing the cost of doing business.  Companies large and small have no choice but to share these costs with the consumer, whether through higher insurance premiums or direct costs of goods and services.  This “tort tax” of unnecessary costs and waste is estimated at $9,827 annually for a family of four. Ultimately, society as a whole feels the effect of excessive lawsuits, a silent weapon against job creation and economic growth.  The poor legal climate in Louisiana costs as many as 50,000 new jobs every year, and changes to our system could result in $1.1 billion in savings for Louisianans.

An efficient and fair civil justice system is necessary to incentivize safe products and services and to provide justice to victims when wrongdoing occurs.  But Louisianans recognize that is not what is in place today.  Although more than eight out of 10 Louisiana voters believe lawsuit reform is needed, policymakers have not done enough to recognize and fight the costs of excessive litigation and a poor legal climate.

Who?
These partners, organizations, and companies have come together to urge the Louisiana Legislature and the Governor to take action this session to improve Louisiana’s lawsuit climate.

Loyola University: Institute of Politics
Not one, but three former Louisiana governors will headline theInstitute of Politics'Ed Renwick Lecture at Loyola University New Orleans Wednesday, March 26 at 7:30 p.m. Former governors Kathleen Blanco, Edwin Edwards and Buddy Roemer will reflect on their extraordinary experiences in politics and discuss the top issues facing Louisiana today. The event is free and open to the public.

The Institute of Politics' fifth annual Ed Renwick Lecture, “One Louisiana, Three Perspectives,” will take place in the Louis J. Roussel Performance Hall located in the Communications/Music Complex on Loyola’s main campus. The discussion will be led by TV anchor Lee Zurik of WVUE Fox 8.

Altogether, Blanco, Edwards and Roemer have served Louisiana as governor for 24 years. Blanco was the first woman ever to serve as Louisiana governor while Edwards spent 16 years in office as governor, serving four terms—twice as many elected terms as any other chief executive of Louisiana. Last week, Edwards officially announced his run for Congress. Roemer is a former candidate for the Republican Party presidential nomination in 2012.

For more than 40 years, the Institute of Politics has worked to educate individuals interested in politics and political leadership in the Gulf region. The institute specifically seeks people who have the talent and willingness to make a difference in the political process and take on the leadership roles which are needed to support the continued strength of New Orleans.

More in this category: « Alex Andreae on JFBConnect, Social Media, and the WWW Future LA Demos Pick up; Glover Running? »
back to top