Governors Blanco, Roemer and Edwards: Has Louisiana blown it? 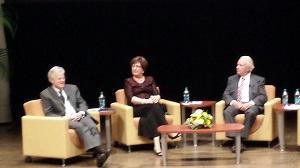 With all of the available resources Louisiana possesses, WVUE's reporter-anchor, Lee Zurik asked, why are we so far behind?  Have we blown it?

In part I of a multi-part Bayoubuzz series, below is the rough, but accurate narrative transcription of the responses.  Also, here is the audio of that discussion.

Zurik: Just with the resources we have, what do we have to show for? We have a struggling education system and a disappearing coastline. Houston and Atlanta have passed us by. I mean, have we blown it or not?

Roemer: Well, look at the facts. In the forty years since Edwin was elected governor, that’s also when I first became active in politics,  Louisiana has disappeared, in part. We've gone from eight to six Congressmen. We are the lowest growing state of the fifteen Southern states, including New Mexico, Texas, and Oklahoma. We've grown 23% in forty years. Texas has grown 125%, Florida 176 %, Georgia 109%, New Mexico 109%, Virginia 72%, and Tennessee 61%. This is not a person's fault. This is our responsibility. People say, “Maybe it was Katrina that did it.” We ranked dead last before Katrina. and we ranked last after Katrina. The census bureau tells me that if we continue this dismal record, we will have one fewer congressman not in the next census, but in the census after that. Now, my thoughts are that maybe we could learn from other states. Maybe we could dare to do tax reform. Maybe we could dare to reorganize our higher education institutions into one institution like North Carolina did thirty years ago. They passed us. I don't have all the answers, but I have a growing concern that we have another hole. We’ve had them before. The best and the brightest left and no one came to Louisiana. It's not a person's problem. It's our problem. We need to do what Kathleen did as Governor over and over again. We need to put education first and reorganize higher education.

Blanco: We know that one of our biggest problems is the poverty that is embedded in our state. I think it's there because of the benign neglect of education in the past. We have this historic problem where we didn't properly address education many years ago, and it's been very hard to dig ourselves out of that. Each governor has tried to address it as best as he or she could, and we have pushed to bring funding to public education, to bring higher education to peer level and to bring our teachers in elementary and secondary education up to the Southern regional average, which is higher than the national average.  I've always believed that this problem is based in lack of proper education. We've had some leadership issues in the past, even at the local level, so there’s a lot of responsibility to share. I think we still must keep going forward.

Edwards: I don't share this pessimism about Louisiana. I've been all over this country. Not as much as Jindal has, but..I've been to California. It’s no better there. We have a lot going for us. There are more people living in this state who was born in this state...that ratio is higher than in any other state. I agree that education is the key to progress, but it's not the only key. We are a warm and sympathetic people who care about each other. We have a large population of poor people we’re trying to take care of. There are a lot of good things about this state. It's not perfect, and it’s not going to be. I would simply say that in the last forty years, I was Governor for 16 years, the others for 26 years, and we all had different approaches. We all tried to do our best. I live in Ascension Parish. If you go up the Mississippi River, the riverbank is dotted with giant industries. The bottom line is that it ain't all right, but it's not bad. It's good living in this state.I like it here. I'm going to do everything I can to make it better.

More in this category: « Bayoubuzz's Edwin Edwards interview: Election and the legacy Roemer, Edwards: Katrina criticism of Blanco was unfair »
back to top