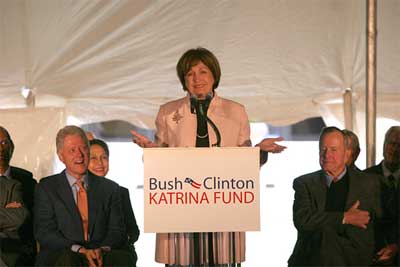 As the Louisiana US Senate race and then statewide elections take shape over the next two years, one of the lead questions being discussed is whether democrats can win statewide.  Part of the answer to that question might be how Louisiana voters feel about Obamacare on election day.  For Governor Edwin Edwards, whose race for 6th Congressional District representative, both of those issues are paramount as he tries his hand at politics at age 86 after years of being in retirement--forced retirement, at that due to his stint in the federal prison.

Below is a rough but accurate accounting of the panel conversation.  Here is the audio.

Zurik: Let's talk about the Democratic party. Can a Democrat still win in Louisiana on a statewide level? Is it possible?

Blanco: I think it's possible. I think that Louisiana people still look at individual candidates and determine whether they agree or disagree with them, like them or dislike them. People vote for candidates for a whole lot of different reasons. And again, we have not been that partisan over time. But I know that things are changing in the state. We've always been a conservative state. We’ve been mostly Democrats in our history, but we’ve been conservative Democrats. So that part has not changed.

Roemer:That's what's wrong with this system. Two political parties. And the two former governors are absolutely correct. Man or woman, Democrat or Republican; what you look for is attitude, willingness to work together, somebody who doesn’t seek headlines, but results. That’s true for America, too.

Zurik: Governor Edwards, you're going to be 87. Why are you running?

Edwards: People tell me, “You're 86 years old, you're retired, why don't you just do what you feel like doing?” But that’s what I’m doing! I’m concerned about what's going on in Washington. No one seems to be able to sit down and compromise and get things done. I'm not doing this for myself. Nothing of what I propose will come to fruition in my lifetime. But I have five children, including one seven-month-old, and I'm concerned about  my children and my grandchildren, and I'm concerned about this country. The other thing is: I like public service. I like to be able to do things for people. It's what makes me get up in the morning, feeling good about myself, and that's why I'm gonna try. They say that a Democrat can't win in the 6th congressional district. We'll find out.

Zurik: Are you for or against Obamacare?

Edwards: Well, I'm against some of it. Some of it didn't lead to the consequences they were supposed to lead to. But - who could say that they don't support that people with preexisting conditions can now get insurance where they couldn't before? Or that now, if you work for somebody, you can get another job and take your insurance with you? Earlier, you didn't have the affordability. Thousands of people in this state can now keep their children on their policy until they're 26 years old. Those are all good provisions. On the other hand, a 60 year old woman has to have maternity benefits in her policy. That's ridiculous, and it shouldn't have been there. Obama's problem and the Congress's problem is that “People who like their insurance coverage can keep it” is the big lie of the decade. That is clearly wrong because people should be allowed to have that choice.

Roemer: It's taking an answer and putting it wrong. It doesn't touch the pharmaceutical challenges and the cost of drugs. It does not allow any import from Canada. It doesn't allow the purchase of insurance across the state line for health benefits. That's called competition! That's called choice! That will drive the price down! But you know why Congress didn't do that? Why Obama didn't even propose it? Money, my friend! They are the largest givers to candidates for Congress and the President of the United States. End of story.

Governors Blanco, Roemer and Edwards: Has Louisiana blown it?

More in this category: « Jindal supports legacy claims legislation against Oil and Gas Adley: thousands in east Louisiana could be without natural gas due to pipeline »
back to top