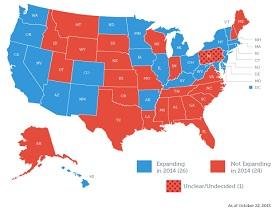 Obamacare and specifically the Medicaid expansion have been debated in the Louisiana legislature and throughout the political state capitols over the past few years.  In a recent panel discussion at Loyola University, both former Democratic Louisiana governors, Edwin Edwards and Kathleen expressed their opinions that Louisiana should expand Medicaid in Louisiana, a policy the Louisiana GOP and governor Jindal has strongly opposed.

GOP former governor, Buddy Roemer, expressed no opinion on the expansion issue but said the party has been embarrassing up to this point and offered suggestions that would improve the healthcare system in the country.

Zurik: Next question. Should Louisiana take the expansion of Medicaid?

Roemer: I don't think that is going to solve our problem. Our problem is a fundamental problem of healthcare in this country. You can not afford to be sick. I don't care how much money you have. If you have plenty of it, you can pay your own way, and you can get decent insurance. But about 40% of the people in this country can literally not afford to get sick. What we need to worry about is not the expansion of Medicaid or Obamacare. We need to come up with a program that increases the chance of affordability for not just poor Americans, but every American. The fundamental issue is what we talked about a minute ago: competition across state lines, changing the pharmaceutical package, and shutting off funds from lobbyists and special interest money. The Republicans - and they are embarrassing up to this point - criticize Obamacare, but they cannot come up with a single point to make this a better system. I don't know enough to answer the question about Medicaid in Louisiana, but I do know that no single step will make a difference until we change the way healthcare policy is decided in America.

Blanco: Whether the tenets of the Affordable Care Act were properly drafted or not remain to be seen. I'm sure there's a lot of adjustment needed to make it a better program. But again, as Governor Roemer just said, a lot of people can not afford to be sick. A lot of people in Louisiana do not make enough money to buy insurance, nor do they work for companies that buy health insurance for them. The federal government has offered to pay for three years worth of health insurance for low-income people in Louisiana. That's about a quarter of a million people. That's a heck of a lot people who will be insured immediately if our Governor would change his mind and accept it. It's inevitable because eventually, we will, but it's a use-it-or-lose-it proposition now, and you cannot go back. If the next Governor says we want it sometime in the future, tax dollars are going to be financing health insurance for other people in other states instead of Louisiana. That's part of the problem. This pride thing is false pride. There's been disagreement about the statement that it is going to cost us more money. The office in Baton Rouge that looks at costs says that Louisiana will save 100 billion dollars over the next ten years instead of losing money. The decision is more political than a good, strong financial decision. It's foolish not to take advantage of such an opportunity.

Edwards: Estimates vary, but at least 250 000, possibly 400 000 children, old people, unemployed people, and underemployed people are without health insurance. This program would be paid for fully by the federal government for the first three years and 90% thereafter. Now, about our governor's worry about the cost for the state. By the time the state has to pay anything, he'll be gone because his term expires because the three years are up. Even if you don't believe in the words of Jesus that we should care for those who are less fortunate than we are, let me give you a good reason why you should be for it. These people are not going to suffer and die at home and not seek medical attention if they're sick. No mother is going look at her child with a 106 degrees fever and not take the child to the hospital. The hospital has to take them and treat them under the bill passed under Reagan. What does that mean? When you go the emergency room, it will be filled with people waiting to get medical attention because they have no other way to get it. You'll be in a long line of people waiting. Next, your bill is going to increase because the hospital can't charge these people for their treatment, and that affects the cost of your bill. So one way or the other, we're going to end up paying for it. This is an opportunity to let the government pay for it for a while. Like Kathleen said, if we don't take it, somebody else will. They'll get the benefits. In 2014, no mother should have to go to bed at night and wonder whether if her child wakes up sick, he or she would have to die in pain without medical attention.

More in this category: « Blanco, Roemer, Edwards back common core for Louisiana Oil and gas lawsuit find friends in ex-Governors Blanco, Roemer and Edwards »
back to top