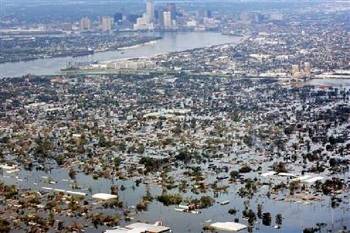 In a state, such as Louisiana, when so much of the revenues entering state and local coffers come from the Oil and Gas industries and wherre so many local jobs are dependent upon that industry, one would think that ex-Republican and Democratic governors would  be supportive of stopping litigation against the members of that industry.  Last year, a levee district filed a class-action lawsuit against that industry for damages inflicted upon the coast.

In fact, current Louisiana Governor, Republican Governor Bobby Jindal, has made a major effort to reconstitute the Southeast Louisiana Flood Protection Authority-East's member-body and to lead legislation during the upcoming legislative session, to stop the lawsuit.

In a recent panel discussion with former Louisiana Governors, Republican Buddy Roemer and Democratic Kathleen Blanco and Edwin Edwards, all three governors had strong words opposing those efforts to thwart the legislation supported by Jindal and the oil and gas industry.

The levee district was created after Katrina after the horrific damage caused by the levees breaking.

In the case of Edwards, the former Governor is running for US Congress in the 6th Congressional District in which this issue could be greatly debate during the campaign season.

Here is a transcript of that Q and A from that panel discussion:

Zurik: One of the levee boards in New Orleans filed a lawsuit against the big oil companies. Any opinions on that?

Roemer: All you have to do is fly over the coastline of Louisiana. You don't need a big speech. You don't need a lecture series. You don't need to read a book. Just get on a plane, fly over our coastline, and you'll see that we are literally disappearing. And it's along the channels built. They should absolutely pay. They are capitalists; they are maximizing their profit. The job of the regulators and the citizens is to make sure that the damage done is repaid. That should figure in their cost of profit. And it's not done now. And Louisiana is particularly egregious in this matter. After Edwards defeated me and took office, he dropped the big lawsuit against big oil companies. I don't know why that was done. Maybe in Edwards' opinion, they didn't need to be sued and challenged by the state of Louisiana. But in my opinion, this ought to be a full profit state, but those who abuse the privilege and do not pay for damaging the land and water and the air which we breathe, ought to pay the cost of it.

Edwards: The reason I dropped the lawsuit is because it was improperly filed. But you're right. The oil companies have made billions of dollars from the production of oil and gas by our shore. That all started when Huey Long was governor. Most of the damage occurred before thirty years ago. About thirty years ago, companies began to move offshore and didn't do so much work in the coastal areas. But the damage is there. They have made millions of dollars, and they have paid millions of dollars in taxes. At the very least, we need to go to court and find out who is responsible, to what extent, and whether or not they should be required to pay.

Blanco: I think that both governors are correct. We all know that the channels that were dug and not restored have contributed to our land loss. I'm very proud to say that I created the independent levee board and designed it to be free of politics. I'm really concerned that it's going to be politicized. I think that it's a great example of honest citizens who really look at a problem and feel like there is a solution that they can come forward with without worrying about political ramifications. Having said that, I would predict that these major companies will come to the table if the lawsuit isn't destroyed in the political process by the legislature. They will have to negotiate, and they all know that it is long overdue. They know that they do owe something to the state of Louisiana. The lawsuit may not go all the way through the court system, but it will bring everybody to the table and force a more honest discussion than we've ever seen before.