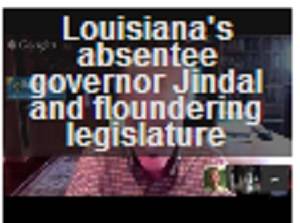 The Louisiana legislature is entering into its third week of the annual legislative session.  What is happening?  What are the issues being discussed by the state government.

Bayoubuzz held a webcast on Saturday in which the participants discussed the session and other Louisiana political matters.  Publisher Stephen Sabludowsky asked former Louisiana Senator, Secretary of State and Insurance Commissioner Jim Brown and the current The Lens reporter, Tyler Bridges, to o provide an update and overview of the young session.

In part one of the Google Hangout webcast, Brown and Bridges responded by citing the lack of agenda exercised by Governor Bobby Jindal, thus far, and how the lack of direction was impacting the legislative bodies, to date.

Sabludowsky: Let's talk about Louisiana politics. There's so much going on. I know that you, Tyler, has been to Baton Rouge with Jim. Why don't you give us an overview of what is going on there?

Bridges: It's starting slowly. The Governor has a very light agenda. When that happens, it takes energy out of the session, and it's unclear what all of the main issues will be. At least, at this point, one of the main issues is common core, which is a set of standards that Louisiana has. There's a group of conservatives who do not like this at all, and they are trying to either pull Louisiana out of common core or modify it. I did a live chat with State Rep. Cameron Henry, Republican from Metairie, one of the leaders of those who want to get rid of common core. He told me that he didn't think they would be able to repeal common core this year. Another big issue is the effort by State Sen. Robert Adley and a couple of other senators and house members to repeal or kill the lawsuit filed by the Southeast Louisiana Flood Protection Authority against 97 oil- and gas companies. Of course, there are issues with the budget, as well, as there are every year.

Brown: I will take up what Tyler said. He hit it right on the head. When I was a state senator for eight years, every single year I went to the legislature to hear the Governor's agenda to set out priorities. Governors in the past were very specific: "Here's what we got to get done - 1, 2, 3, 4, 5." Buddy Roemer did that, Kathleen Blanco did that, Mike Foster did that, and Edwin Edwards always did that. Jindal just came in, wished everybody well, and gave a few general comments. He has abdicated the role of being the aggressive leader of the legislature on his quest to seek national office. There's some floundering around, there are lots of voids, and common core has found its niche. There's an effort, primarily by Democrats, to override the Governor's effort to not take all this federal money for healthcare. The Governor is a little wishy washy on the lawsuit. I don't mind the Governor not setting the agenda; the legislature independently should set the agenda. However, traditionally, the Governor has. There's a void. I had breakfast this morning with several legislators, and they said they each got their individual packet of interests, but there's no overall focus on bigger issues.

Bridges: The fact that the Governor does not have a major agenda this legislative session, does that mean that there are no major issues that need to be addressed in Louisiana?

Brown: There is a whole litany of issues; it's a question of the overall picture of addressing those issues. For example, common core has gone from almost a throwaway to being a major issue of micromanaging smaller issue. It shouldn't be a big issue, but it is. The healthcare funding shouldn't be a big issue. The big issues are things that a leadership role from the Governor should have worked out months or years ago. These niches are being cut out for issues that should have been taken care of in a routine manner. The lawsuit, for example: everybody has a right to file a lawsuit. There's no doubt that the oil companies have caused a great deal of damage. That's for the court to work out. Suddenly, it has become a legislative issue so that the oil companies can get their niche and not have to face this in court.

Sabludowsky: From a theoretical standpoint, isn't it better to have the legislature do their business and present it to the Governor? To me, the Governor has too much control and power, no matter who the governor might be.

Brown: Ideally, that's what should happen. That's what happens in other state legislatures. But this hasn't developed here now, so the legislature is walking around and saying, "Well, we haven't heard from the Governor." There's no leadership emerging within the legislature itself to build that consensus. As far as a party caucus or a South Louisiana caucus, or an education caucus, leadership has not risen to the occasion. There's a void because of the Governor's lack of leadership, but the legislature hasn't quite matured enough.

Sabludowsky: What's the downside? Is there a downside?

Bridges: My sense is that in any democracy, specifically in the U.S., direction will always come from the leader, whether it's the President, the Governor, or the Mayor of a town. Legislatures will either go along with that or develop an anti-agenda. It's not very easy for a large legislature to develop their own agenda. As Jim points out, there's no tradition for that in Louisiana. If the Governor is not  there, you're asking for a big change in behavior. I don't think we can expect that.

Brown: Governors have always been very strong in Louisiana, but my experience as a public official is that governors are perceptive to legislative ideas. Both Edwin Edwards and Mike Foster were open to ideas to put on their agenda. So governors, legislators, and public officials could traditionally work together. The problem with Jindal is that he's an absentee governor. Legislators have told me that outside of his opening address at the legislature, they've not seen Jindal in a year, let alone talked to him.

Sabludowsky: I know that Tyler has written extensively about that. Why don't you give us some information about that?

Bridges: The refrain is "Where's Bobby?" I did a story before the legislative session began indicating that the Governor didn't have much of an agenda. At that point, the only legislators who had met with him recently were the President of the Senate, the Speaker of the House, and the Chairs of the two budget writing committees. I have been checking with legislators later, and none, except the Chairmen of the various Senate committees, who had lunch with him last week, has met with Jindal, as far as I know.

Brown: It's extremely rare. Maybe it wasn't in the Governor's agenda, but legislators could bring things and include them in a working relationship. That happened with virtually every governor we've had so far. But Jindal gives a speech three or four times a week, telling people all over the nation that the only job he wants to have is Governor of Louisiana. Well, he should come back and do that job. There has been some effort by the Democratic Party with John Bel Edwards and Karen Peterson. Tyler mentioned Cameron Henry. David Vitter is influencing this legislature, building a more conservative coalition of younger legislators to take on the Governor and set out his focus and take on his territory. But outside of that, there's a lot of floundering going on in Baton Rouge right now.

Sabludowsky: Tyler, do you agree? Do you think that Cameron Henry is taking marching orders from Sen. Vitter?

Bridges: I don't think he's taking marching orders from Sen. Vitter, but he has a political ally in him. I wrote a story before the legislative session where various people predicted that Sen. Vitter would play a role in local politics in an unprecedented way. Of course, he has announced his plans to run for Governor. He and Bobby Jindal are not political allies, and one of the things that Vitter has done is help elect various allies, particularly in the House, and Rep. Henry is one of them.