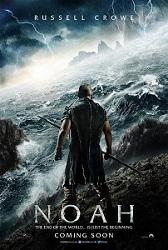 Once again, Hollywood has injected left wing themes into a movie, but this time the subject matter to known to almost every American. The great biblical story of Noah has been twisted and perverted by an atheist director more interested in selling tickets than in staying true to the Bible.

It seems we can never trust Hollywood to present movies in a positive Judeo-Christian manner. Many hoped that the movie Noah would be different, but, sadly, it is more of the same.

Even though the studio claimed that the movie is based on the Bible, director Darren Aronofsky radically changed the story of Noah to include Transformer like rock monsters who guarded the ark. In Genesis, the Bible mentions “giants in the earth in those days” but Aronofsky decided to make action figures instead.

It seems clear that the director was trying to tell the tale of what would happen to the earth if the environment is not preserved. In the movie, the “creator” is upset that people are not properly caring for the earth. The movie Noah is an attempt to tell a familiar biblical tale in a new age and pro environmental movement way. Surely Al Gore is pleased, but, certainly Billy Graham must be quite disturbed.

The Bible depicts Noah as a great man, a faithful servant of God. The movie presents Noah as a lunatic ready to kill his grandchild and unwilling to save the life of his son’s girlfriend.

The movie interjects material that is pure fiction, such as a vicious stowaway on the ark. Elements of mysticism are also sprinkled throughout the movie. In fact, after his grandfather Methuselah gives him a potion, Noah receives God’s message about the flood in a drug induced haze.

According to Dr. Brian Mattson of the University of Aberdeen, all of this shows that the movie is “a thoroughly pagan retelling of the Noah story direct from Kabbalist and Gnostic sources.” While the movie does not mention the word “God,” it often references the “creator.” Mattson believes that this “creator” is the Gnostic evil “god” and not the God of the Bible.

It is not a surprise that millions of Americans were fooled by this Hollywood nonsense, but it is a real tragedy that some Christian leaders endorsed this trash. The great hoax is that this movie is not biblical, it is pure Hollywood fantasy. Bible believers will not find much to recognize in this movie, so devout followers of all religious faiths should spend their money elsewhere.

Hopefully, the first week’s box office receipts of $44 million will not be replicated in the weeks to come. The movie cost approximately $125 million to make, so it is uncertain if the movie will make a profit. Instead of wasting their money on Noah, Christians should flock to God is not Dead and Son of God, two movies with a much better and more positive message.

Let’s not reward Hollywood for their crude hatchet job on the greatest book in history. If the movie eventually bombs, maybe Hollywood will think twice before trying another April Fool’s joke on America.