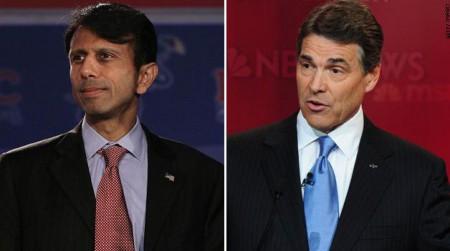 Today, Bobby Jindal, whose absence from Louisiana has been a topic numerous media reports and complaints from Louisiana voters has announced a plan to replace President Obama's Affordable Care Act. It's hard to interpret this announcement as anything else than a sign that Jindal is preparing for the race to become the Republican Presidential candidate in 2016.

According to various media sources, the plan, was not released to local media who has been critical of the governor, but instead, was announced in a Politico column in advance of a speech.

This pitch for a national audience also coincides with Louisiana legislative leadership's displeasure with Jindal's own plan budgetary plans to pay for Louisiana healthcare.  As published in The Advocate, on Tuesday:

“It’s troubling to see this money in your budget that I know will create a problem for us in the years to come,” House Appropriations Committee Chairman Jim Fannin told state health officials.

One-time money refers to funds that are collected once and are not likely to be available in the future.

If the dollars aren’t there, an even larger budget problem would occur because the state dollars are used to attract more than that in federal funds, said Fannin, R-Jonesboro.

Fannin, is a Republican.

According to the Washington Post, Jindal's 26-page plan reiterates his belief that ACA needs to be completely removed and replaced. One of Jindal's proposals is to "a global grant  program" that gives states a fixed amount of money without imposing federal requirements to provide certain  benefits. He also suggests to eliminate the tax preference for employer-based insurance and allow insurance to be sold across state, the Washington Post article says. Jindal said, "There is a void out there. Consider this plan open-source code for Republicans, who are welcome to cut and paste from it."

Jindal has not officially announced that he wants to run for President but his recent comments indicate that he is thinking about running.  While Jindal travels the nation, his popularity numbers at home have decreased. In a February survey by PPP, 53% of Louisiana voters were disapproving of Jindal's performance. Only 37% of Republicans think he should run for President.  In that poll, for the second year in a row, Jindal's lack of popularity makes his one of the most unpopular governors in the nation.

The Democratic National Committee soon released a response to Jindal's health care proposals. In the response, they point out the dire situations many Louisianians are in: "Louisiana has one of  the highest rates of uninsured residents in the entire country. More than one in  five residents do not have health insurance." According to the DNC, Gov. Jindal's refusal to accept Obamacare's Medicaid expansion proves that Jindal is putting "his own rigid partisanship and political ambition ahead of the what's good for the state." Repealing Obamacare, DNC argues, would result in millions of Americans losing their current health care plans and bring the insurance companies back in the driver's seat. Moreover, they stated, "Jindal's plan is nothing more than a rehash of failed Republican ideas that have been - and will  continue to be - rejected by voters.

Yet there are signs that Jindal’s plan might please its intended audience - Republicans and Republican voters. Jay Newton-Small writes that the plan “hit on all the feel good conservative touchstones: insurance plan and doctor choice, empowering markets, Obamacare repeal and preserving anti-abortion policies...This was a plan with a specific audience in mind: Republican primary voters.”