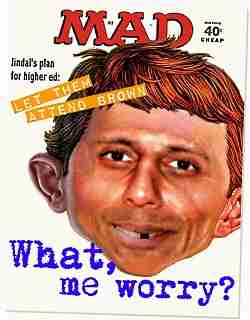 Next year, as the magnolias come to bloom, Bobby Jindal will take his last lap of the Louisiana Legislature. Yes, the term-limited, part-time Governor will be busily boxing up the mansion in 2015.But while the luggage tags and boarding passes might be swept into the garbage can,the Governor’s budget mess will stick with taxpayers for years to come.

According to fiscal experts in the Legislative Fiscal Office, Jindal will leave Louisiana taxpayers witha massive $982.5 million budget chasm for the FY15-16 year (next year):

Legislators are especially concerned about a line in a report by the Legislative Fiscal Office. The office — staffed by financial experts — looked at the governor’s budget and concluded that “$982.5 (million) may require another source of revenue in FY 16.”In other words, nearly $1 billion in fiscal obligations could need a new funding source in a year’s time.

“It looks like all we’re doing is kicking the can down the road, and now it looks like the can might be getting bigger,” said state Rep. Eddie Lambert, R-Prairieville.

But this is typical of Jindal’s callous disregard for Louisiana. He does not care about the state, at least when it comes to things that don’t advance his own career. He is ruthlessly disrespectful to the people of this state. And we’ll only know the full damage when he’s gone.

by Lamar Parmentel, Chief Curator of the Daily Kingfirsh...First published on that

More in this category: « McAllister affair legs: Threats and exposing GOP elected officials? McAllister, Vitter and Jindal handling the tar-baby of sex scandals »
back to top