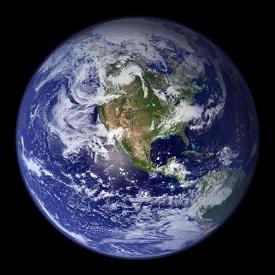 Earth Day is celebrated all over the world and is discussed on the airwaves and at the water coolers.

Also discussed was how the born-again city post-Katrina, New Orleans is dealing with the ever-growing bike-paths being created.

Crouere: We have a caller, Jim from Uptown. What's going on?

Jim: Organic food is a big trend now. I think there's something more important that we'd like to go after and that is alternative transportation. Could you imagine, instead of driving a large vehicle across the causeway, driving a vehicle similar to a single-person motorcycle that does 80-100 miles per gallon. You would be protected from the weather; it would keep you cool or warm. Here in town, if you would like to ride your bike somewhere, even if your destination is only a mile from your house, you realize the safety problems with riding on the street.

Crouere: Did you hear earlier that we are one of the worst places in America to bicycle? We have one of the highest death rates in the country.

Crouere: Don't forget the baseball wielding attackers, either. They're out there.

Jim: There are a lot of things we would like to do. But we have not created the circumstances necessary to practice effectively being green. We're not getting there. I'd like to go ride a bicycle, but for a lot of us, it's a question of wanting to risk going on the road and being killed. This guy on a bike was killed in New Orleans East on Chef Highway. I don't know if Chef Highway is a great place to go ride a bike, considering we have people who don't pay attention when they drive down the road.

Crouere: Motorists are not, in many cases, watching what they're doing. We have a lot of problems with accidents, insurance rates, potholes. Be aware out there, and let's see what we can do to get these numbers down. Jim, thanks for calling.