The Republican Parish Executive Committee of St. Tammany has passed a resolution calling on Gov. Bobby Jindal and the state Legislature to remove Common Core standards and curriculum and the PARCC assessment and reporting requirements, and to protect parental rights.

The resolution, passed last month and posted on the organization's website today (LINK) applauds the quality of local public education in St. Tammany Parish and joins with the St. Tammany Parish School Board in its opposition to Common Core.

"What may have begun as a well-intentioned movement towards higher educational standards has been revealed as a behemoth that impairs educational advancement, imposes on parental rights, and invades the privacy of students and their families," said RPEC Chairman Peter Egan. "Our resolution passed unanimously and has been sent to Gov. Jindal and our entire legislative delegation.  We hope they will heed our call, and we expect it."

The Republican Party of Louisiana today filed a federal ethics complaint against U.S. Senator Harry Reid (D-Nev.) for improper use of taxpayer resources for campaign purposes.

“Americans are fed up with the type of hyper-partisan campaigning, and it is appalling that Harry Reid would use taxpayer resources to breach Senate ethics rules and pursue this kind of activity in his official capacity as Senate Majority Leader,” Louisiana GOP Executive Director Jason Dore said. “The Senate Ethics Committee needs to make clear this type of behavior has no place in the United States Senate and no one is above the rules, even the Senate Majority leader. It’s time Harry Reid is held accountable for his actions.”

Reid has used both his official Senate website and official Twitter account in violation of U.S. Senate rules to host and promote the partisan attacks. Senate rules state that the use of “Senate Internet Services for personal, promotional, commercial, or partisan political/campaign purposes is prohibited.” If Reid’s official staff were involved in preparing the attacks while on official time in official office space, that would also be in violation of additional Senate rules. 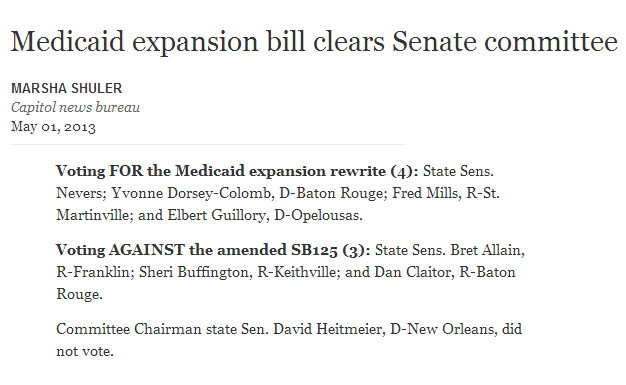 I voted to expand Medicaid in Louisiana, I voted to bring the Affordable Care Act to Louisiana and when I made that vote and that was my vote on the Senate Health and Welfare Committee to keep it alive and bring it to the floor. I did point out that there are some serious defects in it some serious flaws and that I think we can do better than that. Arkansas for example has an Arkansas plan that uses some of the Obamacare parts and some things that are endogenous to Arkansas. We could have done the same thing in Louisiana and come up with a better system. The Obamacare as it exists now does not place any of the burdens on drug companies for example, they are major contributors to the president and so he set them aside. The same thing is true for insurance companies they have not had to carry any of the burden so the burden has fallen on taxpayers and on small businesses. We can do better, but yes I do support it, I did support it, I voted for it.

State Sen. Elbert Guillory, R-Opelousas, who serves on the Senate Health and Welfare Committee, told The Daily Advertiser that he will not support Medicaid expansion and believes Jindal's proposal will cover uninsured residents.

Ad Watch: Billionaire Koch Brothers Launch Another Misleading Ad Against Sen. Landrieu In Their Quest To Buy A Senate Seat

NEW ORLEANS – The out-of-state billionaire Koch brothers are launching yet another misleading attack ad against Sen. Landrieu today in their ongoing quest to buy a U.S. Senate seat, and Senate that fights for them instead of the middle class. Like many of their previous attack ads, their latest ad misleads Louisianians and distorts Sen. Landrieu's record.

As official studies have proven, the Affordable Care Act does not affect Tricare or VA health care benefits. Louisianians know Sen. Landrieu has always fought for our veterans and supported protecting and extending their health benefits. She has repeatedly voted to expand and improve Tricare and VA healthcare. She has always fought to protect and increase benefits for National Guardsmen, and she led the effort to eliminate the "widow tax" on survivors' benefits. She also helped lead the fight to expand educational opportunities for our veterans and incentivize businesses to hire veterans when they return home.

"Louisianians know better than to believe what they hear from the out-of-state billionaire Koch brothers," said Adam Sullivan, Sen. Landrieu's Campaign Manager. "Sen. Landrieu has always been a fighter for our service members, veterans and military families, and she always will be."

Landrieu Pushed To Bring National Guard Benefits In Line With Active Duty Troops. In March 2004, Sen. Landrieu introduced the 21st Century Citizen Soldier Benefit Act to improve the benefits available to guardsmen and reservists. The legislation gave any guardsman or reservist called to duty for two years during any five-year period the same G.I. education benefits received by their colleagues serving the same amount of time on active duty. The bill would have also allowed reservists and guardsmen the opportunity to collect retirement benefits at 55, the same age as active duty military servicemen.  [Times-Picayune, 4/18/04]

Landrieu Co-Sponsored Measure To Expand GI Bill Of Rights To Provide Better Education Benefits To Veterans. In 2007, Landrieu co-sponsored legislation to expand the GI Bill of Rights to give veterans who served between three and 36 months on active duty full education benefits equal to the highest tuition rate of a public college or university in their state, as well as a monthly stipend for housing determined by geographical areas. [S 22, Co-Sponsored 5/23/07; CQ Today, 4/30/08, 2/28/08]

Paid for by Friends of Mary Landrieu.

Cassidy Arrogantly Insulted Many In the "Jindal Gap," Calling Them "Illiterate"

New Orleans, Louisiana – This morning the Louisiana Senate Health and Welfare Committee will hear Senate Bill 96, which would put a constitutional amendment on the Nov. 4 ballot, letting voters decide whether to expand access to health care for 250,000 working Louisianians. Bill Cassidy and Bobby Jindal are in lockstep when it comes to rejecting health care for hard-working Louisiana families.

And for Cassidy, sticking it to working Louisianians who are trying to get ahead is all part of his plan to reward millionaires and billionaires at the expense of middle-class families and seniors.

"Bill Cassidy wants to raise the retirement age to 70, make Medicare a voucher program and force seniors to pay more, while billionaires pay less, and his arrogant opposition to health care for 250,000 working Louisianians is all part of his agenda to take care of billionaires at the expense of the middle class and seniors," said Campaign for Louisiana Communications Director Andrew Zucker. "Bill Cassidy's arrogant opposition to health care for 250,000 working Louisianians sends a clear message to seniors, the middle class, and all who aspire to build a future in Louisiana: put him in the Senate, and you'll be on your own."

According To The Kaiser Foundation, Over 240,000 Louisianans, Or 87% Of Uninsured Of Non-Elderly Louisiana Adults In Poverty Will Not Have Access To Subsidized Health Coverage Without Medicaid Expansion. “Eighty-seven percent of all non-elderly Louisiana adults living in poverty will not have access to government subsidized health insurance in 2014 despite a new national health-care law that was designed to extend coverage to more people. That’s according to Kaiser Family Foundation, which Wednesday (Oct. 16) released a new state-by-state analysis of health-care coverage in the 26 states that have so far declined to expand Medicaid to their poorest residents. Nearly 5.2 million poor, uninsured Americans — 242,150 of them in Louisiana — will not have access to insurance provided for under the Patient Protection and Affordable Care Act signed into law in 2010.” [Times-Picayune, 10/16/13]

Cassidy Called Medicaid Expansion “A Lousy Idea” And “A Lie To The American People,” Citing A Cancer Patient Who Lost Her Doctor Because Of Low Medicaid Reimbursement Rates. In July 2013, Politico reported: “It can be easy to forget that health care policy involves real people with real illnesses. Rep. Bill Cassidy delivered a reminder Thursday, describing his follow-up call with an ovarian cancer patient profiled by the New York Times in 2010. The woman lost her doctor when he stopped taking Medicaid patients due to low reimbursement rates. ‘She died,’ Cassidy exclaimed, kicking the underside of a table in the Speaker’s Lobby, where he was seated. He says the story shows why expanding Medicaid under the health care law is a lousy idea. ‘And this is the program we’re expanding?...Those folks who think they put in wise public policy…are pretending they’re providing that woman with cancer in Michigan access to health care is a lie to the American people.’” [Politico, 7/12/13]

Cassidy Labeled Medicaid Expansion A “Prisoner’s Bargain.” In February 2013, The Daily Comet reported: “Under the law, Medicaid will be expanded to include all residents with incomes up to 133 percent of the federal poverty line or an income of $30,675 for a family of four in 2012. The expansion is federally funded for the first three years, but after that it would be up to states to support expanded Medicaid. While this seems like a good deal, Cassidy said it is a ‘prisoner's bargain’ for Louisiana.” [Daily Comet, 2/21/13]

The FY 2015 Ryan Budget Raises Taxes On The Middle Class By $2,000, Giving Millionaires A Tax Cut Of Over $87,000 Each.  The Ryan budget proposes to lower tax rates for high-income earners from 39.6% to 25%, which would require the middle-class to pay more in taxes in order for the budget to balance as proposed.  A Tax Policy Center analysis of a similar proposal found that the tax reductions for high-income earners would cost $5.7 trillion, making it mathematically impossible “to enact Rep. Ryan’s tax policies in a deficit-neutral tax reform without including big tax increases for low- and middle-income taxpayers.”  Taxpayers with income exceeding $1 million would receive an average net tax decrease of over $87,000, according to a White House analysis.  In order to pay for these tax breaks, the Ryan budget would  raise taxes on middle class families with children by an average of at least $2,000.  [House Republican Budget Chairman’s Mark,4/1/14; New York Times Editorial, 4/01/14; TPC, 3/15/13; TPC, 8/1/12; CTJ, 4/2/14; WH, 4/1/14; WH, 4/8/14]

The FY 2015 Ryan Budget Will Force Seniors To Pay More To Remain In Medicare.  Under the Ryan budget proposal, more than 45 million seniors could be forced to choose between traditional Medicare and a voucher program starting in 2024.  According to a previous Congressional Budget Office report, the proposal would force seniors who want to remain in traditional Medicare to pay $800 more per year than they would have under current law, raising premiums by 50 percent.  Furthermore, seniors electing to stay in traditional Medicare and avoid buying private insurance will pay $1,200 more than seniors in private plans.  Private plans would be permitted to tailor benefit packages to attract healthier beneficiaries and leave the sicker, more expensive patients for Medicare. Over time, Medicare would become less financially viable and would have to raise premiums, driving away more healthy beneficiaries and setting off a premium spiral that could unravel the program. [House Republican Budget Chairman’s Mark, 4/1/14; CBO,  9/13/14; Census, 2010; CAP, 4/1/14; DPCC, 3/13/13; CBPP, 3/15/13]

Paid for by the Democratic State Central Committee of LA, www.lademo.org, and not authorized by any federal candidate or candidate’s committee.