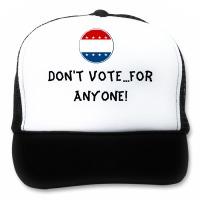 we used to have real leaders in america. leaders of courage and intelligence, larger-than-life men and women whose dreams for america could do more than merely inspire. they changed people.

well, folks, you don’t need me to tell you that those men, and women, just ain’t around washington any more, and definitely not in this election cycle.

the reason for this is simple: the corruption and moral bankruptcy of both major political parties and the democratic process by global corporate fortunes.

you have no real choices between parties any more. presidents, senators, congress members regardless of party are bought and paid for by the same corporate megalomaniacs whose greed has infected american political life, and the cancer can no longer be cured by conventional means.

all major news media have been bought by the same handful of scumbags. now they’re just good lapdogs who throw real news to the curb, trivialize the important and inflate the empty and worthless to distract us from the ugliness at our nation’s political core.

one the one hand we have the incumbent, a man who i voted for, who has disappointed a generation with his vacillations, his destruction of our most basic rights, his willingness to compromise his agenda and settle for mediocrity and half-measures.

his recent victory in trampling the constitution by declaring a state of permanent martial law in america is one of the most shameful political acts in decades. that’s saying a lot in this past decade of illegal and bloody wars fought for oil and non-existent weapons of mass destruction.

obama’s newly-won power to have soldiers enter our homes, in america’s cities and towns, without warrant, just on his sayso, and drag our citizens from their homes and imprison them permanently if he deems fit is the most hideous, shameful and horrific act of any democratic president in my lifetime.

if it were a republican president pulling this crap, democrat sycophants would be screaming bloody hell. but that’s okay, because whether this election or the next, one day it will be a republican wielding that power, and then you will be in a hell like you never imagined, because you’re already in it right now. you’re just in denial.

as for the republicans, just look at the cast of millionaire hypocrites and clowns they’ve offered up as alternatives: one percenters who pay a fraction of the taxes that you do. moralizing frauds who preach family values while cheating on their spouses every chance they get. evangelical hypocrites who wrap bigotry and hatemongering in prayer, pandering to the worst in us. their compassion for americans seems to be reserved only for the wealthy, who may be called on to actually pay fair taxes for a change.

these are the pathetic choices the corporations are shoving down our throats and offering us as leaders.

congress is just as bad if not worse. they totally ignore the will of the people and are the most reliable servants to the corrupt that money can buy. they debate for weeks then succeed in passing laws that change nothing. lobbyists now write the legislation they vote on. they ignore our cries for change and choose one batch of billionaires’ money over another to decide their votes.

do you really think your opinions are shaping their votes on internet rights? they’re weighing the scales between big media money versus big online media money, and seeing whose pile of cash is bigger. and now that online media is weighing in bigtime, the tide is turning. congratulations america. one pack of billionaires is gonna get a little richer than the other pack. god bless america.

this is the same congress that has empowered our president to steal our constitutional rights. they have failed to punish the greedy architects of our economic downfall and continue to lavish our tax dollars on them. they continue to accept billions in campaign contributions and perks from these same perpetrators.

activists in both parties decry each other while in truth, both turn blind eyes to the fact that the same guys are paying all the bills for all their anointed heroes. it’s a shell game, and differing stands on the social issues are just a smokescreen to take our minds and attention off the real business of the string pullers.

democracy as we were taught it is dead. we are now a corporate oligarchy with illicit money clogging the arteries of decency and fair play. the choices we are given by these greedy connivers are really no choice at all.

and that, folks, is why it’s time for us to take the most dramatic and drastic action in our lives to shake this whole corrupt system to its very core.

so today i propose a day of action that can have a greater impact on american politics than the occupy movement, bigger than the tea party movement, and more effective than any political action than you may ever take again. it’ll scare the crap out of every single person in washington.

AND ALL YOU HAVE TO DO…IS NOTHING.

it will be the national vote of no confidence in our government.

our non-votes will be counted by the hundreds of millions of butts glued to our couches that day, refusing to play in a rigged game, a game run by cheaters, a game we can’t win, a game where we’re forced to choose between crappy and lousy.

there are pundits and activists who will cry to the heavens about this proposal, this protest. they will say that people fought and died for the right to vote and that it’s a precious thing, but they’re wrong in saying this because that america no longer exists. they live in a dream world where we once had real choices, which is what real democracy is supposed to be.

some lawmakers have proposed mandatory voting in major elections. those people who fought and died for our right to vote? they didn’t fight and die for the right of the state to force us to vote. you know where that happens? china. the former soviet union. north korea.

i won’t vote and you can’t make me.

some lawmakers have tried and are succeeding in stripping voters they don’t like of the right to vote. and these are the a-holes we elected that are doing this. we voted these corporate handpicked cretins into office in the first place via this corrupt process. do you see the irony and stupidity of it all?

still others will say that if you don’t vote, you get the government you deserve.  i say we don’t deserve the one we’ve got.

i say that to participate in this charade of an election would be a lie. i say that if you do cast a vote in this election, it’s a tacit act of support for a corrupt process. it’s a vote saying that you’re willing to go along with and accept this cancerous thing that has replaced real democracy.

now, it just coke versus pepsi, exxon versus chevron, pick your poison. it’s a joke, and the joke’s on us.

i for one refuse to participate. i refuse to take part in the big lie. it’s my right, one of the few i’m still sure i have, at least for now.

what will this national day of inaction accomplish?

maybe nothing. if that’s the case, at the worst, you’ve had a nice day off from the crap and phoniness. order a pizza. watch a movie.

but i think… i know…that something important will happen as a result of the national day of inaction.

i think that the whole world will see in the clearest way that we acknowledge that this system that has led to illegal wars, thousands of deaths, unheard of pollution, the glorification of ignorance, and unimaginable greed is something we’re no longer willing to endorse.

i think that we will heap shame upon the heads of these corporate meatpuppets posing as public servants who survive our day of inaction. i think that if any of them have a flicker of conscience left in them, that maybe they’ll remember what america is supposed to be instead of what they’ve helped it become. maybe a few of them will try to do better.

and i also think that, when the next election rolls around, that maybe a new generation of citizens will remember the day of inaction. maybe, they’ll be ready to begin the struggle to take america back from the corrupt and return it to we the people.

and maybe we’ll find the real leaders we’ve needed for so long, but are nowhere to be found in 2012.

maybe, when that day comes, we’ll no longer have to settle for what’s left of democracy. maybe, that day, there will be people worthy of our votes.

More in this category: « 2nd amendment cry is weak as we gunned down constitution Kate Middleton, William, Royal family: Beware the birth of The Omen »
back to top