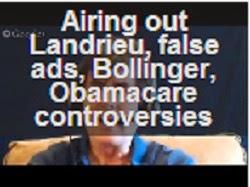 After the “fake ad” featuring a recreation of a Senatorial testimony, Mary Landrieu received criticism. The searchlight is now again on the Senator after a commercial with Boysie Bollinger giving his support was released. Critical voices claim that Bollinger only supports Landrieu because she has been giving his shipyards contracts, and that after doing the commercial, he expects that the favorable treatment will continue.
There is no doubt that Obamacare has been and is controversial, and Landrieu's support of the healthcare plan is one of the major reasons why she has been attacked by Americans for Prosperity, the Koch brothers, and others. Polls show that Americans are not satisfied with the plan. However, do they want to keep the plan and improve it, or do they want to get rid of the whole plan?
These were the discussion topics in this section of the WGSO-Bayoubuzz radio hangout webcast with Jeff Crouere and Stephen Sabludowsky.

Crouere: I want to further discuss the controversy surrounding the fake Mary Landrieu ad and how that opened her up to criticism. She was making similar criticism about the other side.

Sabludowsky: She should be criticized for that commercial because she had criticized the Americans for Prosperity commercial, which starred a lady who was an actress saying that she was hurt by Obamacare. To do the same thing and recreate something that is not true is problematic. She deserves the criticism for that. I have problems with any recreations. The new commercial by Americans for Prosperity is with the Marine guy. Just the fact that he's going to the mailbox...it's a recreation. I have issues with all ads of that type.

Brian: I have a question. The Republicans are talking about Mary Landrieu and the government contracts that a number of Louisiana shipyards got. Did any of these shipyards receive contracts for coast guard ships that were not seaworthy?

Crouere: I think there were some problems with the cutters that were built in the Bollinger shipyard.

Brian: That's what I'm asking. I don't understand how a man can back someone who gave him a contract to build ships that can't be put out into the open ocean. That's the left foot stepping on the right foot.

Sabludowsky: I only know what I've read in online papers. He received the contract and the ships were not seaworthy. He won a case against the Department of Justice and the Department tried to appeal. That's all I know. However, I think he said in the commercial that he's employing 3,000 people. You have to ask, "Is Mary Landrieu helping his business?" She is. Is she helpful to other business in the same community? Absolutely. They have to make a decision to whether Mary Landrieu is more helpful than harmful. There is good and bad on both sides.

Crouere: It opens both the Senator and Bollinger to criticism for the connection. Some are going to question his Republican credentials; others are going to say that he's only doing it because he's getting lots of contracts. Democrats are just excited to have a major Republican on board here. Have you heard whether any elected officials are going to sign up and support Landrieu again? Last time, Kevin Davis, Newell Norman, Mason Foster, Jack Strain, and others lent her some critical support.

Sabludowsky: I haven't heard anything about that. Your initial topic was, has she done something for these people? I feel pretty confident that she has. Do the people who contribute to campaigns expect something back, particularly if they have donated large sums of money? Yes. That's why they do it. They could be doing it for other reasons, such as the benefits for the state and the country. But are they spending millions of dollars because they think it's the best thing to uphold the American system, or are they doing it because it's in their best interest business wise? It works both ways.

Crouere: Here's my view. I know a lot of people in Louisiana express their views to her about Obamacare. We have sent faxes, e-mails, telegrams, and protests; we've called and paid personal visits. All of this was ignored because she voted for the President's program. The vast majority of the people in Louisiana were opposed to it. She overlooked us and voted with President Obama. I think that's going to be an issue. I just saw poll numbers on ABC News that show that the people are giving President Obama a failing grade for Obamacare. I don't think that's going to change between now and November.

Sabludowsky: I certainly think it may change a little bit. To me, the question is whether or not people are ready to void Obamacare. So far, I don't know how Republicans assume that they're able to win both Houses, even if they win the Presidency and both Houses, I don't understand how they are going to be able to void Obamacare. Does that mean that you're going to act retroactively and provide certain types of coverage that didn't exist before but now exists, like preexisting conditions? How do you do that? The polls indicate, even in Louisiana, that people want Obamacare to be improved. Whether you like it or not, that's what the polls are saying.

Crouere: Improved? When something is so dysfunctional, inadequate, and problematic, I don't think improving is the best option. The best option is to completely dismantle it. I would repeal it. Obviously, you're right; the Republicans can't do it until they take over the White House. If they have a majority in Congress, however, they can repeal it.

Crouere: The American people never wanted it in the first place. If the Republicans say that they are going with a plan to repeal it, all they are doing is following the rule of the American people. That's what elected representatives should do.

Crouere: I would dispute that. I've seen poll numbers that are very negative about Obamacare. People are not saying, "This is a great program! Let's tweak it here and there." They are saying it's a disaster. If we're making massive changes to it, practically dismantling it, then maybe I'm for that.

More in this category: « How high can Louisiana legislative fiscal hawks fly? Barnes & Noble: Gone By New Year’s? »
back to top