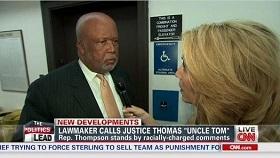 This week, the owner of the Los Angeles Clippers was not the only person exposed as a racist. U.S. Congressman Bennie Thompson (D-MS) qualified for his racism card this week when he stated on a New Nation of Islam radio show that Supreme Court Justice Clarence Thomas is an “Uncle Tom.” He reiterated the incendiary charge in an interview with CNN.

Thompson claimed that it is fine to use the insulting term since he is black. It is similar to the debate regarding the “N” word as some believe it is only a problem when white people use the term, not African Americans. Unfortunately, such a double standard is unfair, as it lessens the appropriate outrage when such a divisive word is used.

It is sad that so many liberal African Americans are so bitterly opposed to Justice Thomas. He should be viewed as a hero to everyone in this country, especially African Americans. Thomas has withstood bitter and unfair personal attacks to serve with distinction on our nation’s highest court for almost a quarter of a century.

The Congressman is upset that Justice Thomas opposes the Affordable Care Act and affirmative action, while supporting voter ID laws. In Thompson’s view, if black people do not support the liberal agenda, they are “Uncle Toms.”  In reality, Thomas is one of a growing number of African American conservatives who believe in individual responsibility, free markets and constitutional principles. African Americans, like all citizens, should be allowed to disagree with liberal policies, especially since these policies have been so destructive to minority communities throughout the nation. Almost every one of the nation’s poorest cities is led by liberal Democrats. If such policies were so effective, those cities would not be bastions of poverty, blight and crime, instead they would be thriving.

In the interview, Representative Thompson did not limit his divisive remarks to criticizing Judge Thomas. He also claimed that opponents of President Obama were racists. He said that GOP leaders showed “blatant disrespect” toward President Obama and were motivated not by principle, but only by “race.”

These charges are both ridiculous and rabble-rousing. He conveniently overlooked the vile protests against President George W. Bush and the films that ridiculed him and even showed his assassination.  In addition, Thompson has not talked to each opponent of President Obama to judge their heart and see if racism is involved. In reality, unlike the dream world of Bennie Thompson, almost all opponents of President Obama are motivated by genuine intellectual disagreements, not race.

The Congressman is engaged in the typical liberal game of claiming racism when it does not exist. In fact, by calling Judge Thomas nasty names and unfairly labeling the President’s opponents, Thompson is the only one acting like a racist.

If there was any consistency in our country, Thompson would have faced the same penalties as NBA owner Donald Sterling. Both engaged in hateful, vile commentary, but only one was penalized. Thompson will continue to utter racially divisive comments and suffer no penalties from Congress or the media. It is another example of a vicious double standard in our country. If Thompson was a white Republican representing Mississippi, instead of a liberal African American Democrat, the outcry against him would have been deafening.