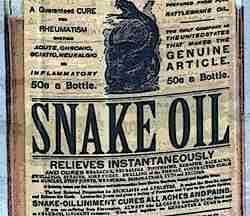 Any successful stage magician must be adept at the art of misdirection so as to be able to successfully pull off his sleight of hand maneuvers while the audience’s eyes are focused elsewhere.

That being the case, just call Gov. Bobby Jindal the aspiring-but-not-quite-there-yet magician: the wannabe.

Rather than coming off as an inept stage magician, however, Jindal more closely resembles the old traveling snake oil salesman standing on the back of his wagon full of patent medicine as he assures the crowd gathered around him to “Try this: it’ll cure what’s ailing you.”

“But don’t look at me when I’m telling you this; instead, watch what those bureaucrats in Washington are doing. They’re the one who are wrong-headed, who have no legal basis for doing what they’re doing.

“But you’d better hurry. That’s right, step right up and get your Miracle Jindal Juice ‘cause I can’t stay here long. I have to be moving on. I’ve gotta be in Iowa next week, New Hampshire after that and then Washington, New York, Los Angeles…

That’s the Bobby Jindal we all know here in Louisiana—the real Bobby Jindal and not the Bobby Jindal of mythical proportions being foisted upon the rest of the country by Forbes magazine, Fox News, Politico and the op-ed pages of the Washington Post and the New York Times.

Of course he does have his supporters closer to home, namely a publisher of a Baton Rouge business publication who was Jindal’s campaign finance chairman and who now serves as an appointed member of the LSU Board of Stuporvisors, an editorial columnist for the Baton Rouge Advocate who doesn’t even live in Louisiana (he resides in Mobile, Alabama), and an associate professor up in Shreveport who contributes to a blog supported by a lot of really bizarre advertising (“highly valued sponsors,” they’re called). Here are a few examples:

But enough of that. Let’s get back to Bobby Jindal: the Man, the Legend.

Perhaps it is only appropriate that as a child, the governor who exists in an insulated fantasy world where he is always right in the face of overwhelming evidence to the contrary, took his name Bobby from a character on the saccharin-laden sitcom The Brady Bunch where every problem was solved and every crisis was overcome in a 30-minute time slot. Too bad it just doesn’t work that way in the real world.

If, while sitting on the living room floor as a kid, he had gotten hooked instead on The Beverly Hillbillies, Do you think Louisiana would have elected Jethro Jindal? (Before you answer that, think Swamp People and Duck Dynasty.) Jay Leno joked that it was probably a good thing Jindal didn’t watch Gilligan’s Islandgrowing up lest he might have adopted the name “Little Buddy.”

Perhaps he should have; after all, he has been lost for six years now.

Instead of staying at home and doing his job, Jindal would rather flit about the country, telling anyone who will listen how great he is, how wonderful his programs are, and how he personally has had to overcome the dictatorial hand of Washington in general and Obama in particular.

And now, the latest insult to his constituents here at home is an op-ed he penned in Sunday’s (May 4) Forbes magazine which leaves the reader (in Louisiana, anyway) wondering if Forbes is really this desperate to fill its pages with self-serving, aggrandizing claptrap.

The piece, titled How We Achieved Louisiana’s Economic Surge, is filled with misleading statistics designed to convince readers that he took over a cesspool of ineptitude six years ago and turned it into paradise on earth for every living, breathing citizen of the state.

Following are excerpts from Jindal’s latest self-anointing op-ed, with our comments, in italics, following each of Roy’s observations:

As absurd as that article was, one also published by Forbes in October of 2011, seems in retrospect to be a parody of Jindal’s administration rather than a serious treatise by writer Avik Roy: