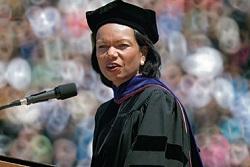 Liberals are always preaching the values of diversity and inclusion. Unfortunately, such platitudes are just rhetoric, because upon closer examination liberals hate diversity.

As evidence, just examine some recent disturbing activities on the campus of Rutgers University. After former Secretary of State and National Security Advisor Condoleezza Rice was invited to give the commencement address, liberals went crazy. In February, the faculty council passed a resolution demanding that the university withdraw their invitation to Rice. Thereafter, student protesters stormed the office of the Rutgers President to express their disapproval of the selection and condemn Rice as a war criminal.

What is ironic in this whole series of events is that Rice no conservative, but a very moderate Republican, who just happened to serve in the George W. Bush administration. Her academic and professional credentials are extraordinary and Rutgers students should have been extremely grateful to have someone of her caliber address them.

Unfortunately, only negative protests were heard from students and faculty, so Dr. Rice eventually decided to decline the invitation. In her letter to the university, Rice noted that “I have defended America’s belief in free speech and the exchange of ideas. These values are essential to the health of our democracy.”

Sadly, it seems that universities are no longer committed to free speech or open debate as only liberalism is allowed. This trend has been occurring across the nation for years. Whereas, universities are supposed to be laboratories for free discussion, embracing all ideological viewpoints; upon closer examination, liberalism is not only dominant, it is unchallenged.

On a regular basis, conservative speakers are either completely shunned or, if they are invited, verbally and even physically attacked on campus. Conservative commentator Ann Coulter, among many others, has been targeted. Today, even moderates like Dr. Rice are unwelcome.

At none of colleges will there be protests from conservatives outraged at the liberal commencement speaker. Conservatives understand that the overwhelming majority of college professors and administrators are liberal.  They are also comfortable enough to not be threatened by a liberal giving a speech. They are secure in their beliefs and will listen with respect, even if they disagree.

In contrast, liberals are totally threatened by an opposing viewpoint. They are not at all secure and are worried about their set of principles being tested by a contrary position.

It is not just at commencement speeches that liberals are dominant, throughout the entire college experience. Political correctness has totally infected most colleges in the country.

It is no wonder that students graduate from college and then vote for Democrat candidates. It is only through experience and trying to maintain a household, pay taxes, deal with bureaucracy and red tape that many of these brain washed youngsters begin to see the fallacies of liberal policies in action. The real world proves to be a much more valuable teaching tool than the liberal teaching in those ivory towers.

More in this category: « SMOR poll: Stoking the liabilities of Landrieu's stroke Jindal, Red States reject Obama money, yet most dependent on fed dole »
back to top