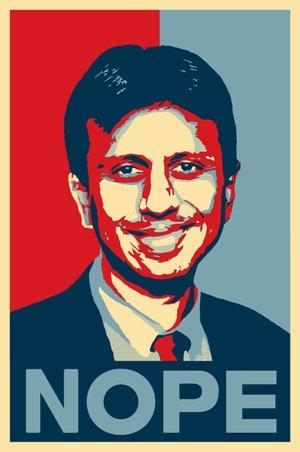 When Louisiana’s favorite Koch-head Bobby Jindal rejected the Medicaid expansion provided under the Affordable Care Act (ACA), aka Obamacare, he trotted Kathy Kliebert, his third secretary of the Department of Health and Hospitals (DHH) before the legislature to proclaim that the state would have to pay $1.7 billion over a decade for the expansion.

The nonpartisan Legislative Fiscal Officer, however, cut that 10-year estimate by half: $886 million, pointing out that in the first three years, the expansion would actually reduce state spending.

Never mind that his refusal to accept the $16 billion in new Medicaid money would provide health care for nearly a quarter-million Louisiana residents currently without medical coverage.

Never mind that his decision meant that Louisiana residents, like those in the other 20 or so state that rejected the Medicaid expansion, would be paying for its implementation in other states.

Never mind that the $280 million Medicaid expansion would cost the state in 2022 pales in comparison to the $2.2 billion the state is projected to spend on incentive payments to attract private business to the state—some of which would produce no new jobs or at best, low-paying jobs.

And never mind the fact that despite Jindal’s disdain for accepting federal funds (remember how he, like Queen Gertrude in Hamlet, protested too much about accepting stimulus funds from the 2009 American Recovery and Reinvestment Act and then helicoptered to all those Protestant churches in North Louisiana to hand out the checks?), Louisiana still ranks as the fourth most dependent on the federal government.

That’s correct; Louisiana is still co-dependent on the federal teat and if Jindal, despite all his anti-government puffery, dared slicing and dicing other federal largesse from an already stressed state budget, he may well have open insurrection on his hands.

Apparently the only area where he can safely reject federal funding to satisfy the far right—especially his benefactors the Koch Brothers, Charles and Bill—is in areas where only the poor and disenfranchised—those unable to fight back—are impacted.

Wall Street Cheat Sheet, an online news service with 11 million monthly readers, notes that despite the ratcheted-up rhetoric between red and blue states, it is the red states (Republican) that are more likely to receive help from the federal government—a fact that helps them keep local tax bills lower and unimaginative politicians like Jindal in power.

In computing its rankings of states’ dependency on federal government, the Cheat Sheet report took three factors into account:

Red states are known for imposing lower taxes than blue states, but it appears they are able to do so because they are more dependent on federal funding, the report says.

The only states more dependent than Louisiana on Washington are (in order) Alabama, New Mexico and Mississippi.

Louisiana’s return on taxpayer investment, for example, if $3.35, meaning the state receives $3.35 for every dollar it sends to Washington. That’s the fourth-highest return in the nation, behind South Carolina ($7.87), North Dakota ($5.31) and Florida ($4.57). That compares to Delaware’s 50 cents return for every dollar paid to Washington and the 56 cents of Illinois and Minnesota.

The 6.76 of its citizens employed by the federal government ranked 14th lowest in the nation.

But that positive was more than offset by the negative metric showing that 44.26 percent of Louisiana’s state budget is funded by federal dollars, second highest only to Mississippi’s 45.84 percent.

That’s correct: the anti-federal government, anti-Washington, more-is-less governor, who preaches the mantra of less government is the best government, serves as chief executive of the state that ranks second in the nation in its voracious appetite for federal dollars.

A quick examination of the bigger line items in the state’s current General Fund and Capital Outlay budgets (which will expire on June 30) is quite revealing—something a little north of $11 billion:

Written by Tom Aswell. Originally published as a post on his blog Louisiana Voice.