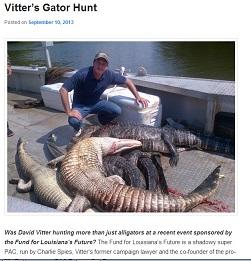 While much of the attention as of late has been on the popularity or lack of popularity of US Senator Mary Landrieu who is in the race of her life for a fourth term as US Senator, another Landrieu is in the polling news--her brother, New Orleans mayor, Mitch Landrieu.

In the Southern Media and Opinion Research poll today, Landrieu and Republican US Senator David Vitter lead the pack for the governor's spot, election fall of 2015.

Of importance, however, is a little fact of perhaps even greater note.  Mitch Landrieu has just been sworn in as New Orleans mayor for his second term.  He has made no public statement regarding any desire to run for governor.

Also, in a head to head battle, it is another story as Vitter soundly defeats Landrieu.

Here is the SMOR survey regarding the upcoming Louisiana governor's race.