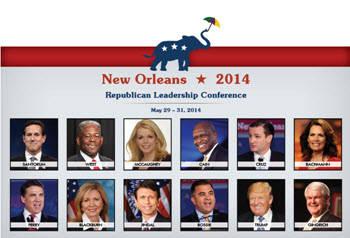 Starting on Thursday, New Orleans will be hosting the Republican Leadership Conference once again. This is the third RLC to be held in the Big Easy. Once again, the conference will feature some of the biggest names in the GOP.

Slated to speak will be a host of congressional leaders including Senators Ron Johnson (R-WI) and Mike Lee (R-UT), as well as Congresswomen Michelle Bachmann (R-MN) and Marsha Blackburn (R-TN).

The main attraction, however, will be the potential 2016 presidential candidates. RLC attendees will surely be interested to hear from several speakers who may be vying for the White House. Louisiana Governor Bobby Jindal will kick off the event on Thursday night. On Friday, businessman and reality TV star Donald Trump and former Congressman Allen West will headline the schedule. Saturday’s line-up includes Tea Party superstar Senator Ted Cruz (R-TX) and 2012 presidential candidates Rick Santorum and Texas Governor Rick Perry.

The conference also will feature Mississippi Governor Phil Bryant, former Mississippi Governor Haley Barbour and former Speaker of the House Newt Gingrich.  Dozens of other speakers will participate in the event, which will attract approximately 1,500 delegates from around the country.

The RLC will be an early test of the popularity of the potential presidential candidates. They will have a chance to test their messages on a crowd of GOP activists, who are politically savvy and very knowledgeable about the major issues of the day.

The RLC will also be a chance for the Republican Party to unite in anticipation of the mid-term elections. Throughout the country, there have been bitter battles between the Tea Party and mainstream wings of the party. These differences should not distract the GOP from their major objective, taking control of the Senate and holding on to their majority in the House.

President Obama and the Democratic Party will be pouring massive amounts of money into these races. With their media allies and the various special interests and leftist organizations providing significant support, the Democrats will be laying it all on the line this fall. If the Democrats can gain control of the House this fall, the President’s agenda will sail through Congress. If the Republicans can capture the Senate, the Obama agenda will be completely stalled. Needless to say, the stakes are high this fall, so the GOP leadership knows the importance of unity and motivating the type of activists who will be attending the RLC.

To see what is really happening with the Republican Party, be sure to catch the activities this week at the RLC at the Hilton Hotel in New Orleans.

For friends of Ringside Politics, there is a special deal for discount RLC tickets.

Click on this link, to take advantage of this offer: www.rlc2014.com/ringsidepolitics

See you in the Big Easy for the 2014 Republican Leadership Conference.