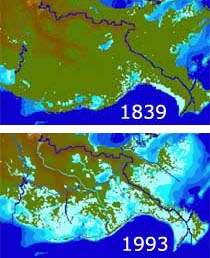 The Bureau of Governmental Research has issued the following open letter to the legislature regarding the controversial legislation involving the Southeast Louisiana Flood Protection Authority - East’s (SLFPA - East) lawsuit against the oil and gas industry:

This week the House of Representatives is expected to vote on SB 469, one of the many bills intended to derail the Southeast Louisiana Flood Protection Authority - East’s (SLFPA - East) lawsuit against the oil and gas industry. The bill would accomplish this by eliminating multiple causes of action for all state and local government entities.

The bill’s proponents have positioned it as simply derailing a rogue lawsuit brought by the wrong entity. At the committee hearing last week, they claimed that the residents of the parishes in the flood authority’s boundaries would not be harmed, because the parishes would still be able to bring suit. The bill’s opponents vehemently asserted that the bill would effectively destroy the public’s ability to proceed in an effective manner against the oil and gas industry for the damage it allegedly inflicted.

Clearly, the stakes are high here, for the public as well as the defendants in the lawsuit.

BGR has not taken a position on the merits or wisdom of SLFPA- East’s lawsuit and is not doing so now. It firmly believes, however, that the legislative response to the lawsuit should not cause the public to lose the rights and causes of action that it has arising from damage to the wetlands that buffer the New Orleans region and the rest of coastal Louisiana. The public should be no worse off after legislation targeting the lawsuit is passed than it was before.

For the reasons discussed below, we are concerned that SB 469, by eliminating multiple rights and causes of actions, may very well permanently deprive the residents of greater New Orleans and the rest of coastal Louisiana of significant claims against the oil and gas industry and others. We respectfully request that the House of Representatives address this concern by providing clear, specific answers to the questions listed at the end of this letter before voting on the bill. The preservation of the public’s rights is too important to imperil.

BGR’s Analysis of the Bill

SB 469 states that, except as otherwise provided in the State and Local Coastal Resources Management Act of 1978 (the Act), no state or local government entity shall have any right or cause of action arising from activities subject to permitting or from any use that significantly impacts coastal waters. The following claims or causes of action are preserved:1

actions brought under the Act by the state, a district attorney or a local government with an approved coastal management program to ensure that uses in the coastal zone are permitted and conducted in accordance with permits (a “Permit Action”).

claims to enforce contractual rights and pursue administrative remedies relating to certain state or federal permits in the coastal zone.

in the case of any government entity except a local or regional flood authority, claims related to sixteenth section school lands or claims for damage to property owned or leased by such governmental entity.

All other claims or causes of action relating to activities subject to permitting or to uses with significant impacts would be lost.

How does this affect the various entities? Our research suggests that there are major uncertainties and risks that should be publicly assessed by the Legislature.

SLFPA - East. SLFPA - East’s lawsuit is based on causes of action that are not listed above, including negligence, strict liability, natural servitude for drainage, nuisance and a third-party-beneficiary claim. In its suit, the flood authority is seeking injunctive relief in the form of abatement and restoration in the buffer zone that protects the levees. It is also seeking damages for (i) increased operating and maintenance (O&M) costs incurred because of industry-induced coastal erosion, and (ii) the cost of rebuilding the levees to the higher standards necessitated by the loss of wetlands.

If SB 469 were to pass, SLFPA - East would be left with no cause of action against the defendants in its lawsuit. The lawsuit would be dismissed with prejudice. Once that happened, SLFPA - East and the levee districts that it governs would be forever precluded from seeking injunctive relief in the form of abatement and restoration of the coastal wetlands. They would also be forever precluded from seeking damages for increased O&M or construction costs attributable to industry-induced coastal erosion and subsidence. In addition, SLFPA - East and its levee districts would also lose all future claims for damage to property owned or leased by them.

SLFPA - West. SLFPA - West and the levee districts that it governs would also lose all causes of action, except those based on contracts. As a result, it would not be able to sue the oil and gas industry for abatement and restoration of wetlands, damages for increased O&M or construction costs attributable to industry-induced coastal erosion and subsidence, or future property damage.

1 The Secretary of the Department of Natural Resources and parishes with approved coastal management programs would also retain their authority to take administrative enforcement actions, such as issuing cease and desist orders, revoking permits and, in the case of the Secretary, assessing costs and penalties pursuant to a formula in the Act.

Parishes. The parishes would retain their rights under the Act to bring Permit Actions,2to enforce contracts or to pursue administrative remedies relative to permits, and to make claims for damages to property owned or leased by them. However, they would lose all other causes of action.

Other Entities. All other local government and state entities would retain the listed rights and causes of action (to the extent they have them). They would lose all others.

As noted at the outset, the bill’s proponents claim that the residents of the greater New Orleans area would not be left unprotected, because the parishes would still have rights. However, those rights would be limited to the subset listed in the bill. The parishes and all other state and local government entities would lose all other causes of action, including those on which SLFPA - East’s lawsuit is based – negligence, strict liability, servitude of drainage, etc. That leads to a critically important question: who could assert those causes of action on behalf of the residents of the New Orleans region?

Even if the parishes and other state and local government entities retained all their current rights and causes of action, it is difficult to see how they could pursue many of SLFPA - East’s claims. Take, for example, the damage claims for increased O&M costs and for the costs of re-armoring and raising the levees. Those costs are specific to the flood authority. On what basis would the parishes or any other entity have standing to bring those claims? If no one else had standing, the possibility of recovering on those claims would disappear.

As the above indicates, SB 469 raises serious issues. We respectfully request the House of Representatives to answer the following questions on the record before voting on the bill:

Exactly which rights and causes of action would SB 469 and the dismissal of the lawsuit eliminate for SLFPA - East and other state and local governmental entities?

Which causes of action would remain?

How would the remaining causes of action compare in scope to those that were eliminated?

Who, if anybody, could assert the claims made by SLFPA - East in its lawsuit?

Who, if anybody, would have standing to sue for the increased operational and construction costs that SLFPA - East anticipates from the loss of the wetlands buffer area?

Who, if anyone, would have standing to sue for damage to property of the flood authorities and the levee districts they govern?

2 Under current law, and under the bill with amendments proposed by the committee, only parishes with approved coastal management plans have specific authority to bring the actions. The rights of other parishes are indirect and were the subject of debate at the committee hearing.

Who would pick up the tab for any valid claims that are released?

In closing, we urge the House to thoroughly vet the implications of SB 469. Regardless of one’s view of SLFPA - East’s lawsuit, the legislative solution should not cause the public to irrevocably lose rights and causes of action arising from damage to the wetlands.

More in this category: « The seriousness of Kate Middleton’s Naked Bums exhibitions Where’s Jindal’s consulting firm plan to save Louisiana $500M? »
back to top