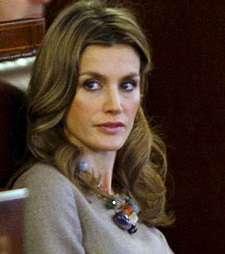 Do you feel those soapy suds and warm water trickling down your neck?
London’s newspaper, The Mail, is trying to brainwash you.
Yup.
The Mail is trying to make you feel better about Kate Middleton being a British royal.
Do you feel better? Or are those just soapsuds in your eyes?
The Mail is trying to make you think that Kate Middleton is the equal or better of Spain’s Princess Letizia, the sexy, brainy bombshell who married Crown Prince Felipe and is now slated to become Spain’s new queen by virtue of the just-announced abdication of Felipe’s father, the long-ruling King Juan Carlos.
Yup.
Don’t let the soap bubbles get into your eyes!

"She’s the slim, chic brunette from a modest background who became a princess. Remind you of anyone?" asks The Mail.

We are supposed to answer, "Why, Spain’s Princess Letizia reminds us of Great Britain’s Kate Middleton."
That is, provided that the brain-washing shampoo and rinse are doing the job.
Yup.
But all it takes is just one look away from the brainwashing to see that Princess Letizia is nothing like Kate Middleton.
For one thing, Letizia is WAY more sexy than Kate Middleton.
For another thing, Letizia is WAY more attractive than Kate Middleton.
Letizia can smile without grimacing.
Letizia can stand in receiving lines for hours without pressing anything to her crotch.
Letizia doesn’t open her mouth wide enough to trap flies.
Letizia’s locks are, well, not blond, but not exactly brown, either. Her hair is always well cut, trimmed and elegant.

Honestly, there’s no competition like The Mail suggests in its title, "Get ready for some serious competition, Kate!"
Letizia is WAY smarter than Kate Middleton, and WAY more poised. Letizia also held a full-time job with people to whom she was NOT related. She was an accomplished news reader and journalist long before meeting Prince Felipe.
And, most importantly, Letizia’s stylish and often pencil-style skirts stay DOWN in public.
And not always, but usually, Letizia’s skirts are either below or just skimming her knees.

Yes! Princess Letizia is frequently photographed, but she is not known for her "hiney" shots. She does not require the services of a "man in grey" whose main function appears to be to follow Kate Middleton and try to batten down her billowing skirts as they rise higher and higher over her butt. "Elle" Magazine recently reported that "Kate Middleton’s Butt Might be Getting a Bodyguard," but that’s old news. Kate’s butt has actually had a bodyguard for quite some time. It’s just hard for man in grey to keep grabbing the royal behind in public, even as the guards try to block any view of Middleton’s bum by throwing their bodies in front of the flapping skirt.

As far as we know, Letizia doesn’t traipse about naked on balconies in Provence.
Letizia likely wears underwear or at least something underneath. But even if she doesn’t, Letizia’s behind has never made the front pages. Letizia usually wears her skirts stylishly tight, and tight skirts are sexy without flapping around and showing us everything.

Not everyone is in love with Letizia, especially in Spain, where a vocal group of persistent anti-Letizia critics believe that Felipe married unnecessarily beneath himself. Throughout their controversial engagement and marriage, even Prince Felipe’s mother, Queen Sophia, could not avoid cringing in public, or else morosely looking away from her smitten son and his passionate choice. Queen Sophia had hoped for a dynastic marriage for her son. Not necessarily with a foreign princess, although she likely would have embraced such a union. But there is no doubt that Sophia had higher hopes for her son than the likes of Letizia, who seemingly came out of nowhere.
Like an asteroid.

Indeed, a commoner cousin of Letizia recently wrote a book claiming that Letizia and Felipe asked him to break into a doctor’s office and destroy records indicating that Letizia had once had an abortion. Rumors abounded that she was an avowed atheist. Even if these allegations are untrue or, at least, unprovable, other things like Letizia’s prior marriage and divorce, and also her penchant for skin-tight leather pants and leggings make some Spanish monarchists roll their eyes.

It is Letizia’s exceedingly good fortune that her husband’s previous serious girlfriends were an underwear model and the daughter of an alleged cocaine addict. It has also helped Letizia’s own popularity that Spain’s royal family has lately had its share of controversy and sorrows. Letizia’s divorce from her academic first husband (whom she had married in a civil ceremony that was not recognized by the Roman Catholic Church anyway) was not as controversial as the divorce of Prince Felipe’s horse-mad sister, Princess Elena, who was married for a while to a kind of weirdo fashionisto fellow from a noble house, Jaime Marichalar. Their wedding was lovely, and they were blessed with two children, a boy and girl. Their divorce came after Don Jaime suffered a debilitating stroke but is considered to be "friendly." And Princess Elena kept smiling right through a sudden crisis when, during a visit with Jaime, the estranged couple’s young son accidently shot himself in the foot with a shotgun, even though legally the boy was too young to be handling the gun.

Prince Felipe’s other sister, Princess Christina, married a handsome blond Olympic handball champion and had a passel of beautiful blond children. But now, Christina lives in virtual exile in Switzerland while Spanish authorities determine whether she should be criminally charged with aiding her commoner husband in an alleged scheme to skim money from a charity-slash-sports organization.

Elena, who inherited her weak chin and masculine looks from her father, King Juan Carlos, and Christina, whose visage is marred by a skin growth which is either a carbuncle or a beauty mark run amok, are no competition for the femme fatale Letizia in the looks department.

But a lack of good looks did not stop Queen Sophia from her own destiny.Sophia was the daughter of Paul I, King of the Hellenes (more commonly known as Greece), and Frederica, a member of the royal house of Hanover. She was well-educated, spoke numerous languages, and was a truly accomplished martial artist and a yachtswoman skilled enough to be her brother’s alternate for the Greek Olympic sailing team. Her first meeting with her future husband the future King Juan Carlos occurred when she tried out a judo move on him. Her younger brother, Constantine, who later took the Greek throne, was dispossessed by the Greek military and then sent into exile, married Princess Anne Marie of Denmark, a distant cousin.

Princess Sophia always had to deal deeply with politics. To marry Juan Carlos, who was expected to take the throne once Generalissimo Franco re-engineered Spanish politics in his own image, Sophia had to learn Spanish, set aside her own Greek Orthodox faith for Spanish Catholicism, and basically make herself acceptable to the Spanish people. Once married, Sophia and Juan Carlos traveled widely.
And not to chi-chi self-indulgent places where they complained that people wouldn’t leave them alone, but on royal visits with not just other relatives but other crowned heads who were then ruling. Sophia and Juan Carlos undoubtedly had fun, but they took their duties seriously and without resentment. Being figures of state were what they both had been raised to do with their lives. They understood and embodied the very essence of their royal houses.

But it is the damned elephant and that...that..that woman who goes with that damned elephant that caused everything that has led up to King Juan Carlos’s recently-announced abdication.
If a king falls off an elephant in the savannah and nobody hears it, does it make a noise?
I’d say, "Sure–a great big noise, especially because of that blond German baroness."
King Juan Carlos, rumored to be one of Princess Diana’s many extramarital lovers, was rumored to be romancing an attractive, younger and very blonde German baroness while vacationing in Botswana to shoot endangered wildlife. The German baroness denies it, and claims that she is the soon-to-abdicate King’s "political advisor." In the midst of all the excitement of this supposedly platonic trip between the King and his "political advisor"), Juan Carlos lost his balance and fell off the damned elephant.
Or did the elephant fall on him?
At least, I think that is how it goes.

Anyway, between shooting elephants and consulting with his political advisor, King Juan Carlos broke his hip, and his kingship has failed to survive his long period of convalescence.
The time between Juan Carlos’s unfortunate fall off that damned elephant and the announcement of his abdication earlier this week gave Prince Felipe and Princess Letizia time to prepare to assume the Spanish throne.
Letizia, now the mother of two beautiful girls, one of whom is named after Queen Sophia, is now poised to support her husband in his kingship.
No flapping, flopping skirts flying over her head; no teensy clutch purses being pressed into her crotch at public events; she even announced her engagement in an elegant pantsuit, and she often carries a briefcase because this Crown Princess, now soon to be Spain’s queen, goes to work for her country.
As queen, Letizia will very likely bring the same talent, enthusiasm, skills and professionalism to her new job as she showed at her old jobs.
And unlike Kate Middleton, Letizia has had real jobs. She’s earned a paycheck. She’s paid her own rent and utility bills. Letizia is a real person.
Well, maybe her nose isn’t real. Letizia’s hawbeak was shaved down quite a bit a while back, supposedly for chronic rhinitis or something. Yup, yup, yup. That’s exactly what I would say if anybody asked me. Who can dispute cosmetic surgery if it’s done for a good medical reason? But everything else about Letizia appears to be the real deal.
I’m not saying that there’s a competition between Letizia of Spain and Kate Middleton. But if there is, Letizia is definitely winning.
Yup.