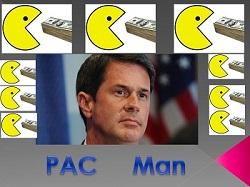 David Vitter is “donating” more than $1 million his own campaign cash to an “independent” SuperPAC supporting him. National Journal says he is “shattering” campaign finance law.

Let’s set up the players, because this gets a little complicated.
1. David Vitter’s current Federal Senate Campaign account (this is the traditional, Federal account for which he raises and spends to get elected to the US Senate. (Latest filing showed $804k on hand)

2. The Fund for Louisiana’s Future, a SuperPAC organized as a “hybrid” to support David Vitter in both his State and Federal adventures. This arrangement was controversial to start, being as how Louisiana used to have rules about how much money a particular entity could raise from any donor for a particular race. We say “used to” because David Vitter’s buddies at the SuperPAC fixed that.

Anyway, Vitter’s campaign and the SuperPAC are “supposed” to be uncoordinated. It does seem like a joke, since the SuperPAC has a picture of Vittycent on their website. However, the rules state that they may SUPPORT a candidate, but just not work with that candidate directly as if the candidate controls them.

So in this case, Vitter is literally moving his current Federal campaign cash that he cannot spend on his Governor’s race into a hybrid SuperPAC that now has the ability to spend an unlimited amount to support him for Governor. Very, very slushy. The potential here for circumventing campaign finance rules here is extreme. Under this potential regime, any Federal candidate can launder their Federal cash back through a SuperPAC for any purpose at all, ignoring their state-level laws on campaign finance.

In Louisiana, that means David Vitter’s quest for a boatload of campaign cash for his Governor’s race is even further ahead than we thought. If you gave money to support David Vitter for Senate, he is now giving it to his buddies to spend it on his run for Governor.
You can see some of the donors in The Fund for Louisiana’s future April FEC filing.
Written by Lamar Parmentel of The Daily Kingfish.
Tweet
Tweet
Published in Latest Buzz