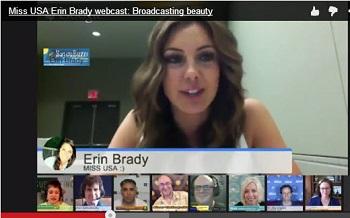 Bayoubuzz interviewed Miss Brady via Google Hangout and Webcast during the days leading up to the big night.  In part one of the interview with Googlers Mia Voss and Susan Finch, Brady talked about her siblings and moving out of the house at a young girl of 17 years old.

Finch: Mia and I both have some backgrounds that can relate to you and your upbringing.   I've been at both ends, watching what can happen in a house that falls part and then watching the older siblings leave and how hard that is. Have you ever talked to your siblings about what it was like for them when you left?

Brady: I have, actually, and my middle sister moved in with me as soon as she graduated from high school. So her and I have a very amazing relationship. My youngest sister; we've talked to her about it, and because there was a little bit of guilt on my end for not being able to have her live with me, as well. But she said she understood that we did what we had to do.  And, she just said that she missed us. That we missed out on a lot of things that went on in her life because we were trying to take care of ourselves. So there's still...we're kind of rebuilding relationships that we were not able to have through those years when we were trying to make a difference on our own. My middle sister and I have a lot in common because I took her in and showed her that she could work and that she could attend college. My younger sister didn't have that. So I feel...there's that little bit of - I don't want to say resentment because she understands - but a little bit of, "Man, I wish I had the opportunity to follow in your footsteps just as well as Lauren did." So, I think we're in a good place now, though. I think we're five years apart, so we have differences whether I moved out or not. But there's a little bit of regret on my end that I wasn't able to have the same relationship that I did with my middle sister. But we're making up for it

Voss: I was wondering, when you kinda came out with that, did you get people like us that were like "Ah!" just feeling like we really related and it was great that someone who are doing so well has gotten past that and is willing to talk about it? Did you get people that kinda.. came to you and shared their story?

Brady: I did. I think I have one example in particular. A girl I had gone to middle school with. I lost touch with her and spent, I don't know, ten or so years. She sent me a Facebook inbox recently, and she said, "Hi, Erin. I've been following your journey. I myself am a recovering addict. I had a heroin addiction. I just want to say I really admire your courage and your strength to get on with your life and make a difference. I was crying as I was reading it, because I obviously haven't spoken to this girl in ten or so years. Just to see that I impacted her without even speaking to her was huge. I've gone through a lot of meetings and conferences at the beginning where I've had people come up to me and say, "It's so great to see somebody in your position take a stance on something that is kind of, you know, it's hard to talk about." People kind of have a stigma associated with it. It's really great that you're bringing a new light on it, and you're showing people that you can change, and you can break the cycle. And, just bring awareness. I think that is what the issue is.  People aren't aware that it's a disease, that it's a huge problem, and that it's genetic, and that it could just as well have happened to me as it did to my parents. I think the feedback was extremely positive. I'm glad. I was a little nervous at first to come out  and talk about it because I didn't want to...my parents are both sober now. I didn't want to, i did not want to make them feel that was all I thought about them or have other people judge them because of that. But I think it was the best thing I could have done because I wish that there was somebody when I was growing up that had reached out and talked about it.

In part 2, Brady discussed her biggest moment last year during the Las Vegas pageant when she won the title.

Brady: I would say the biggest moment during the actual competition was when I was standing with Miss Alabama when it was just the two of us, and one of us was going to become the winner. To my left stood all of the other 48 contestants. They were chanting "Connecticut, Connecticut, Connecticut!" Even if I hadn't won, to me, the fact that these girls who were my competition for two weeks were so supportive and were so excited that if I was going to be the winner, they were genuinely from the bottom of their hearts happy for me, made it. After the kind of...it's a very competitive atmosphere for two weeks. The fact that I was the same girl when I walked in as when I was leaving, and all of those women were able to see that. That genuineness that I have about myself..it was amazing. Even people from the outside said, "Erin. When the girls got eliminated, they ran around to the back and they were watching and saying 'Connecticut, Connecticut, Connecticut!'" I don't know. I think that's really cool. At least if you're not going to win, you want to be happy for the girl that does win and hope that they represent your class well. I'm glad that they felt that way.

During a Bayoubuzz Google Hangout Webcast with questioners from around the world participating,  a question was asked that shows the intensity of being Miss USA:

Is there anyone who tries to manage your presence? In other word, when you are on social media, are you just free to do whatever, or is there someone sort of watching over your shoulder?

Brady: Um, I think I'm free to do whatever as long as it doesn't hurt the image of Miss USA. I think, I have to take into consideration that I am being watched by my fans and a lot of younger demographics. So I just have to be very choosy as to what I decide to post. Again, it's hard, because everybody has a phone and can video you and take pictures of you and put things up that you may not want to be up. So you have to be cautious everywhere you are  and everywhere you go, that you're making the right decisions for the year because, heaven forbid, somebody snaps a shot of you doing something naughty and puts it all over the web.

During the same webcast another question asked what should parents do when considering whether their daughter should participant in pageantry.

Any advice for parents of little girls who want to get into pageants?

Brady: My advice would be, if your little girl wants to be in pageants, then you can absolutely do so. But if it's somebody else's dream that they're trying to make their little daughter be in pageants, then I don't necessarily think that's the best thing to do. But I think if the little girl loves it and wants to be in it, I think it's a great industry to be in. I think it really showcases so many great things, of public speaking, of self-confidence. It really teaches you a lot of about yourself and about how to interact with people. It teaches you a lot about just yourself and meeting other people and traveling. So I think it's a great thing to do, but as long as they have an interest for it in their heart, I think it's great.

Below is a short overview of the highlights of the Webcast, a video by Scott Scowcroft, performing the "Scott Treatment":