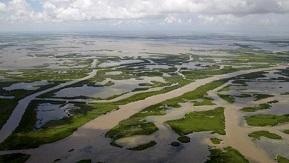 How important was Louisiana Governor Bobby Jindal's levee district legislation bill which he signed on Friday?  With the GOP supporting Bill Cassidy against Mary Landrieu, is there any push-back against the Louisiana GOP for that action despite two other Republican candidates also running in the upcoming US Senate race? WGSO's  Jeff Crouere and Bayoubuzz's Stephen Sabludowsky discuss these issues in today's WGSO-Bayoubuzz webcast.

Crouere: So chime in on some of the things you want to discuss, then we'll throw it out there for the listeners.

Sabludowsky: Well, it just seems to me that one of the biggest issues in Louisiana, I think, of course, is the oil/gas lawsuit, the levee district lawsuit. I'm curious as to, you know, what your callers have felt about it, how callers have felt about it. You know, I mean, I think that is, that particular decision by Governor Jindal will have really lasting repercussions to the state and to Governor Jindal's future career. So, I mean, I have my own personal feelings, but I'm just curious as to just generally do your callers feel that he did the right thing or that what he was just some political...I'm just kinda curious.

Crouere: We'll throw it out there. Obviously, this was the Governor signing a bill the legislature passed, correct?

Sabludowsky: Sure, exactly. Legislature did pass. And the Governor did sign it, although there were a lot of things going on afterwards. I think the number was something like 79 to 90 law professors around the country urged him not to sign it, saying that it would let BP off the hook. And, you know, a lot of other issues, saying that we wouldn't be able to recover against oil companies in the future for oil spills. And just a whole general debate going on that people really wonder whether or not these issues were soundly and solidly discussed during the legislative session. I mean, we know that, for an example, BP has tried to get out of the lawsuit settlement. In terms of what's going to happen now, whether they're going to try to get out of this. You know, these are things that I think have very serious implications. We have a column up there, an article written by Karen Jensen. I created a video that's up there right now. It's about 2 minute video. I really do encourage your audience to take a look at it, and let me get some feedback.

Crouere: Join in and discuss these issues or anything we talk about. Fair game. It's an open line discussion. To talk a little politics, if we can. Of course, you know, talking about the Mississippi race, talking about what's going on with Mary Landrieu. Obviously, the Governor's got his aspirations coming up in 2016, and then the Governor's position is going to be open in 2015. But before we get to any of that, we got a Senate race coming up this fall. And you've got now lot of folks saying that when you get behind Bill Cassidy and having a united front against Mary Landrieu...is that argument, you think, winning out?

Sabludowsky: Winning out in terms of, say, Rob Maness and Paul Hollis not getting any traction; or winning out in terms of, say, Cassidy having a better showing and have more support around the state? You know, certainly I think it's winning out in terms of the latter. I think that any time the Republican Party, whether people support it or not, any time they come out and support a particular candidate, then I think that it has some real implications on the other candidates. And certainly the less money Cassidy spends during this run-up, will be money that he, you know, in support and, I guess, the momentum that he has going in to the run-off, should it be.

Crouere: Let's get to some of these calls. Other issues we're going to certainly delve into, as well. I want to talk a little bit about the common core issue. Let's go to the phone calls. And our friend Susan is with us from her cell phone. What's going on, Susan? Good morning.

Crouere: Any other comments you want to make, Susan?

Susan: Yeah, you know, I can understand why we should all get behind Cassidy, but I just really resent that I have to, once again, [hold?] my nose, you know. I really don't like Cassidy; I'd rather have somebody else.

Crouere: I say you vote your conscience.

Crouere: What if you vote your conscience in the first primary, and then in the second primary, you vote for the lesser of two evils? I mean, whatever you think is the best.

Susan: If she gets more than 50% and get in the first go-around, what are you going to do?

Crouere: But then they got to differentiate themselves from each other so that you can, as a voter, determine which one of them you're going to support. Because right now, a lot of people say, "Anybody but Landrieu," but which person are you going to get behind? So, we'll see. Don't forget there's also Reverend Brown out there! He's running. But Susan, thanks so much, I appreciate the call. Of course, the election is coming up, and we'll see what happens. But I'm getting that from a lot of callers, not just Susan, Steve, but a lot of push-back to what the Republicans are doing, trying to consolidate support for Bill Cassidy. Are you hearing that from people?

Sabludowsky: Not really. To be honest, just on your show. I mean, I think that...

Crouere: You need to get out there more, Steve.

Sabludowsky: Well, I read and and I listen, and I'm just saying that I think, for the most part, you know, the people who are, say, Tea Party supporters, people who are, say, in the same conservative vein that you are, I think that there is a lot of push-back. I can understand why.

Crouere: I was at at a, I was speaking to the Algiers Republican Women's Club the other day. Certainly, a lot of their members were not happy. They were incensed by it. We'll see if that's just a small pocket of opposition or whether that's more widespread. But there's five months from now until the elections. There's plenty of time to see how things fall out. I think if these guys don't get any traction, they'll probably back out and support Cassidy. But if they are gaining traction, I see them staying in.

Crouere: Well, I think a lot of them have looked at that, but look at Mississippi. They're at the verge of taking over a seat there. Look what happened in Texas; they took over a seat there, Ted Cruz. They won the Lieutenant Governor's race. They've won in Nebraska. They won in Utah. So they've won in a number of states. So, I mean, they're seeing success in the Republican Party and figuring that they can keep doing that.

Sabludowsky: So, I mean, why did the Republican Party - we discussed this, I think, last week - mentioned about the conventions from a lot of years? Maybe you can explain in more detail what the Republican Party did in trying to put this, I guess, this pro-Cassidy approval together? From what I've read, at least, I think that it had been done a couple of weeks before, and they announced it during the Republican Leadership Conference. But it was sort of fait acompli. So, you know...

Crouere: Again, I wasn't involved in it. But I think it was just the Executive Committee. I think it was a small group. That was what they decided to do, and certainly, it was a boost to Cassidy. But I'm just saying there's some people who aren't too happy with it. Personally, I don't think the Republican Party should be intervening. If you've got multiple candidates running, let the voters make that decision. Let the voters decide.

Sabludowsky: Yeah. I mean, I certainly understand what you're saying. I mean, I don't disagree. I mean, I really think that it should have been more transparency, and you know, of course, the Republican Party, it's not a governmental institution. They can do whatever they want.

More in this category: « Why didn't Governor "Transparency" Jindal disclose brother's client, BP? Takes a village idiot for "Hard Choices" Hillary Clinton to be dead broke »
back to top