Festigals' Diane Lyons to women: Come to New Orleans, enjoy time for you 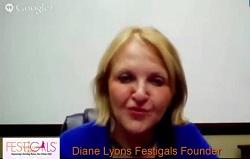 It's time for you! That's the message of the Festigals festival that takes place June 19-22 in New Orleans. Women from all over the country will hit the Big Easy for a weekend of networking, delicious food, and of course, pink cocktails. Diane Lyons, the woman behind this event, took a break from the planning to talk to Stephen Sabludowsky.

Sabludowsky: Hi, this is Steve Sabludowsky, publisher of Bayoubuzz.com. And today it is my honor to have Diana Lyons on a Google Hangout interview with us. Diane, how are you?

Lyons: a week, we're in total countdown mood. Festigals is a fun weekend that we created four years ago for women, by women, based here in New Orleans to invite people from all across the country, plus invite people regionally to come downtown and enjoy what makes our city so fabulous and authentic. And also to celebrate women. Well, you know, New Orleans, we love festivals. And I'm an event planner by career, so I have always met with meeting planners from across the country and shown them our city and sold the city for meetings and events. 80% of meeting planners are women, so I always would hear them say things like, "Oh my gosh, this is a wonderful city! I had no idea that it was so..." And I never knew what that meant. I guess they thought it wasn't the Dome with no roof or Bourbon Street boobs. They were like, "Wow, it's really fabulous. You know, when this meeting is over, I'm going to bring my sister or I'm going to bring my mum. She would love this city!" So I began to think, you know, do we have a celebration for women? Have we invited women to come to New Orleans? And I looked around and realized we had oyster fest and gumbo fest and music fest and gay men's fest, but we didn't have anything for women. So I was like, "Well, somebody has to create it." And when I think like that, I usually go, "I'm that somebody." So I sort of just, in a leap of faith, "Oh, I'm going to create this little women's weekend, and women will all come!" Of course, no journey is never that easy. It's been a great time. And it's been so much fun to showcase the city. Third Festigals in four..four events in three years. Because the first event, it was like a brain idea in March and April and then we did it in October. And then we talked to tourism and marketing and said, "You know, October seems to be a pretty busy month. Do you really need an event in October?" And they said, "No, no, no, we really need an event in June. The third week of June. Or, Diane, you could have September 10." Well, if you're from here, you know September 10 is the peak of that magical H word season, and I didn't want that weekend. So, I was like, "We'll take the third week of June." So the third week of June has been our weekend. So we immediately did our second Festigals within six months in 2012. And then -13 and -14 have followed. This is going to be a great weekend. We started with maybe 100 people that I begged to come. And Soledad O'Brien was our first speaker. She was an amazing woman. She just loves our city, so she came, and she was fabulous.

Sabludowsky: That you're going to up to around, 600 people coming in?

Lyons: 6-700 people, right. We have a weekend package where you can come Thursday evening and stay all the way until Sunday. And that's our Festigals package. And that's about 400 dollars, but it includes breakfast, lunch, dinner, food, cocktails, all kinds of seminars; it includes everything. But a lot of women don't have that kind of time, so they just want to come for a day. So we also have individual packets available on the website at festigals.org where you can just buy a day, or you can buy just a luncheon, or you can just come for the brunch on Sunday. And it's great networking with other women.

Sabludowsky: Is there a message behind Festigals?

Lyons: The message behind Festigals is that we are women, we are strong, we love to give back. So the message would be, it's all about you, taking care of you, taking some time for you. Aren't you worth it? Because as women, we tend to not take time for ourselves. We give, give, give to our mothers, our husbands, our families, but we very rarely take care of ourselves. That happens a lot. So it's all about a little time for you women. That's the message. Come to New Orleans and enjoy a little time for you.