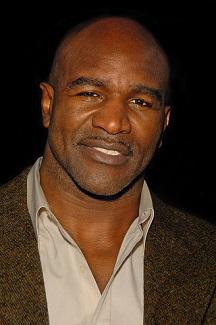 BREAKING NEWS: The former undisputed Heavyweight Champion of the World is getting punched in New Orleans and we all know, he can surely punch back.

The man who has stepped into many terrifying rings, even beating some of the greatest boxers in modern history, such as Larry Holmes,  George Foreman and Mike "Yummy, Love your ear" Tyson, will step into another (and altogether different type of) ring Thursday night June 19 in New Orleans.

Holyfield will headline this month’s Politics with a Punch, Thursday night, June 19, at the Eiffel Society in New Orleans.

Also stepping into the ring are actor and former New Orleans Councilman Oliver Thomas and Fletcher Mackel of WDSU TV.

Politics with a Punch is funnier than laughing gas

Politics with a Punch was founded by WGSO’s Jeff Crouere and Bayoubuzz publisher and local attorney Stephen Sabludowsky, who have co-produced this event for the past twelve years.

Crouere serves as the forever able and accomodating host and emcee.

Doors open at 6.  Delicious foods and “knock-out” drinks can be purchased.

The main event rings at 8pm.

A sellout is expected so get your tickets now.

To learn more, check out ringsidepolitics.com

More in this category: « Cassidy kicking Landrieu; Jindal fumbling, fudging on numbers Search and Examine City Contracts with The Lens »
back to top