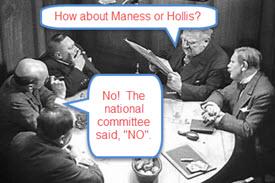 The establishment wing of the Republican Party was given a major shock this week with the defeat of House Majority Leader Eric Cantor in Virginia. He was defeated by David Brat, a college professor who focused on the issue of illegal immigration and reminded voters that Cantor was trying to negotiate a deal for “immigration reform” with Democrats. Conservatives know that such deals are, in reality, amnesty.

Americans are tired of the illegal immigrant invasion that is coming across our southern border. Cantor's position of accommodation is out of step with conservative voters who want the flow to stop and for the borders to be secure.

Brat is another Tea Party candidate who faced long odds and was at a major financial disadvantage. He was outspent 25-1 by Cantor, who had 23 paid staffers. In contrast, Brat employed only two people, including a 23 year old campaign manager. Brat won because of his message, which connected with voters and triumphed over Cantor's superior campaign war chest and endorsements.

Cantor represents the establishment wing of the Republican Party. These moderates have always been uncomfortable with the Tea Party and conservatives who want to defeat Democrats and not work with them.

Conservatives want to massively change Washington D.C, not just tinker around the edges. They are tired of the inaction of the GOP leadership who seem to be deaf to the grassroots on issues such as immigration.

The next campaign to watch is the U.S. Senate race in Mississippi. The incumbent Republican Thad Cochran has been in the Senate for seven terms. He is facing a true threat in Tea Party candidate Chris McDaniel, who is connecting with voters tired of the status-quo.

Here in Louisiana, the Tea Party factor could hurt U.S. Congressman Bill Cassidy, who recently received the official endorsement from the state Republican Party. Cassidy is a moderate, who is facing a challenge on the right from Col. Rob Maness and State Representative Paul Hollis (R-Mandeville).

The problem with the endorsement is that the election is not until November and Louisiana has an open primary system. The voters should be the ones to make the decision, not party bosses. It is premature for a party organization to endorse a candidate so early in the process. While Cassidy is the leading Republican in the race as far as contributions, name recognition and political support, he has not exactly been a big hit with conservative Republicans.

It is true that Cassidy has been a congressman for three terms and started the Senate race quite early. It is also true that it will take quite an effort for Hollis and Maness to catch up to Cassidy, but they have plenty of time.

They might be able to generate support from disgruntled Tea Party voters who are upset with bosses in both political parties. With Tea Party candidates like Brat and McDaniel achieving success in other states, a conservative revolution could reach Louisiana.

It is far too early to short circuit campaigns that are only now beginning. Five months before winning, Brat was losing to Cantor by double digits. Of course, he won despite the endorsements that were bestowed on Cantor.

Let's hope in Louisiana, the conservative candidates, Hollis and Maness, will not allow party bosses to force them from the race. The days of a select group of insiders in smoke-filled rooms making decisions should be over, even here in Louisiana.