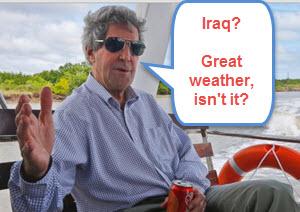 Americans know a few things about Secretary of State John Kerry. Of course, he served in Vietnam and he loves to windsurf. Images of Kerry windsurfing surely did not help him win votes in the 2004 presidential campaign, but, at least, it established his ocean-loving credentials.

Fast forward to his tenure as Secretary of State and we see a world in turmoil as terrorists are on the move in Iraq and we face the prospect of needing help from our sworn enemy, Iran to protect American lives. While our embassy is threatened and some personnel are being evacuated, Kerry is spending precious time with environmentalists. Yesterday, the Secretary of State addressed the State Department’s “Our Oceans” conference, which attracted delegates from 80 nations.

The U.S. is hosting this conference which is focused on how to protect oceans from the ravages of climate change. The problem with such an objective is that the subject of climate change is hotly disputed among scientists, with some attesting that it either does not exist or has not been caused by the activities of human beings.

Regardless of the controversy, liberals like John Kerry deal with climate change as a settled issue. They view climate change as a “shared responsibility” for the United States and other countries throughout the world. As part of this commitment, Kerry believes that the protection of our oceans is “a vital international security issue,” which is an immediate threat to our country. This justifies his involvement in the conference during a time which a terrorist organization is marching through Iraq.

According to John Kerry, climate change is the world’s foremost problem, not poverty, famine, religious persecution, dictatorship, warfare, terrorism or human rights violations. Kerry and many other environmental activists believe that unless we act to combat climate change, we are doomed.

His belief is shared by President Obama, who delivered a speech on climate change last weekend to the University of California, before flying to Palm Springs for some relaxation and golf. Americans have a right to wonder why their leaders are vacationing and focusing on the environment with so many more pressing problems on the horizon.

Politicians are not the only ones obsessed with the issue of climate change. Networks, such as CNN, frequently air specials on the dangers of “man made” global warming, despite disastrous ratings.

In poll after poll, Americans rate climate change as the least of their problems. In the real world, most rational citizens worry about the poor economy here at home and the radical Islamic threat abroad; however, no one ever accused John Kerry of being rational. His liberal voting record in the U.S. Senate was second to none, according to the National Journal.

Americans should have realized the liberal agenda that John Kerry would bring to his position of Secretary of State. By sounding the alarm on climate change, he is being true to his beliefs, but, more significantly, he is also fulfilling the wishes of his boss, the ultimate liberal, President Barack Obama.