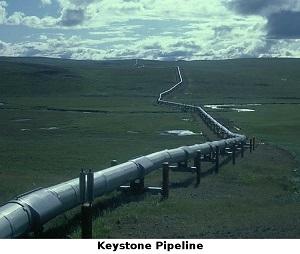 In a battle of press releases today, the National Republican Senatorial Committee (NRSC) and Sen. Mary Landrieu campaign have showcased how important the Keystone XL Pipeline appears to be for the upcoming US Senate election this fall.

Earlier today, the NRSC slammed Landrieu in advance of an important Senate committee vote on the issue. Here is a copy of the complete press release:

Last year, Mary Landrieu told anyone who would listen that she is "indispensable" to Louisiana.  That was, of course, until Landrieu tried to claim that fighting Obama's harmful new EPA standards “are out of her jurisdiction." Last week, Mary Landrieu once again was forced to admit that she isn't quite so influential.

Why? Landrieu has no influence because Harry Reid runs the Senate (the same Harry Reid who Landrieu recently made clear she will continue to support).  Despite her boasts of influence, Mary Landrieu’s mere presence in Washington enables Barack Obama and Harry Reid to enact their radical, anti-energy agenda to the detriment of Louisianans.

"For months, Mary Landrieu has touted her 'clout' as Energy Chair, but as it turns out, Landrieu isn't influential at all," said NRSC Press Secretary Brook Hougesen. "Mary Landrieu's very presence in the Senate enables Harry Reid and Barack Obama to block the Keystone Pipeline and wage a war on energy development in Louisiana and across America."

TRANSCRIPT:
MARY LANDRIEU: “I don’t have to tell all of you how much clout Louisiana has now in our Congressional delegation with me as Chair of the Energy Committee.”
LANDRIEU: “It’s been 18 years since we’ve had the clout that we now have on the Energy Committee.”
LANDRIEU: “I of course am pushing hard for the Keystone Pipeline.”
CNBC VIDEO: “The Obama Administration announcing another delay in a final decision on the Keystone Pipeline, likely putting it off until after the elections in November.”
ANCHOR: “The chance for a vote on the long delayed Keystone XL Oil Pipeline died in the U.S. Senate.”
ANCHOR: “And while Landrieu touts her new power as Chair of the Senate Energy Committee, the pipeline remains in limbo, and negotiations to bring it to a vote have fallen apart.”
JAMES FREEMAN: “If Harry Reid manages with the President to prevent once again this pipeline from being built, her candidacy has no premise.”
KASIE HUNT: “But you won’t say one way or the other whether you'll back Harry Reid.”
LANDRIEU: “Well, if he runs -- If he runs, I will.”
ANCHOR: “Republicans wanted a Keystone amendment added to the bill, but Democrat Senate Majority Leader Harry Reid used a maneuver to block the U.S. Senate from voting on this.”
FREEMAN: “What she is saying is, you've got to keep me as the Chairman of the Energy Committee to keep my influence. What influence? No pipeline. The anti-energy policies stayed the same, if you buy her argument. I don’t get it.
VIDEO: “She claims to have all sorts of power as the new Chair of the Energy Committee, and she’s not getting it done.”

Sen. Landrieu is also under attack from her opponent in the U.S. Senate race, Congressman Bill Cassidy. Cassidy requested Landrieu's call for a vote on the Keystone XL, but he now argues that the vote called and passed today is purely political in nature. Furthermore, Cassidy's campaign has accused Landrieu of holding up a Keystone vote in the past.

In a press release, Landrieu's campaign team rejects these accusations. Fabien Levy, Communications Director for the Landrieu campaign argues that Cassidy is deliberately misleading the people of Louisiana on this issue. The release points out that Cassidy himself requested the vote that he's not criticizing. Furthermore, it emphasizes that it was Senators from Cassidy's party, the Republicans, who blocked a Keystone vote in May this year "after filibustering the bipartisan Energy Efficiency Bill. Levy said: “Congressman Cassidy can’t have it both ways. He can’t call for a vote and then get upset when it actually takes place. I understand his record is suspect at best when it comes to energy and oil, but he should take a cue from Senator Landrieu, not to mention the majority of Louisiana residents, and strongly come out in favor of the Pipeline, like the rest of the Louisiana delegation. This is far too important an issue for the Congressman to flip flop on.”