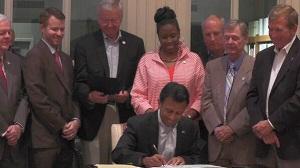 On Monday, the US Supreme Court refused to intervene in a legal fight in Wisconsin over a new law that requires doctors performing abortions to have privileges to hospital located within 30 miles of his/her practice. Opponents of the law argue that this law will shut down half of the state's abortion clinics. Planned Parenthood of Wisconsin and Affiliated Medical services therefore challenged the measure in court. However, the Supreme Court decided to remain silent and wait for the final ruling on the legal challenge.

Albeit taking place in a different state, the Supreme Court’s decision not to intervene might have consequences for in the near future for Louisiana. On June 12, Gov. Bobby Jindal signed abortion legislation bills that can also force abortion clinics to close down in our state. HB 388 by Rep. Katrina Jackson (D-Monroe) requires abortion physicians to have admitting privileges at a hospital within 30 miles of their clinic. The bill was passed by an overwhelming majority both in the Senate and the House. HB 308 by Rep. Hoffman (R-West Monroe), another abortion bill prohibits organizations and businesses performing elective abortions from providing instruction or materials in public elementary and secondary schools and in charter schools receiving state funding. A third bill, HB 1262, also signed by Jindal, “provides women with life-saving information about the psychological impact of abortion and the dangers of the sex trafficking industry to women prior to an abortion,” according to the organization Right to Life.

In a press release, Right to Life expresses their support of HB 388. They claim that the law will protect “women and children from an abortion industry often more interested in profit than the best interest of patient health and safety.” DHH Secretary Kathy Kliebert, another supporter, argues that the bill protects women’s health.

Critical voices argue that the bill is a tactic to reduce women’s constitutional right to safe and legal abortions. Some of the supporters have also admitted that their goal is to reduce abortions in the state. HB 388 can, according to Emily Lane of Times-Picayune, result in four out of five abortion clinics in Louisiana closing down. New Orleans Abortion fund co-founder Amy Irvin is concerned about the consequences. She believes that the shutting down of clinics will not reduce the number of abortions, but rather increase the use of illegal and unsafe abortion methods. President of Planned Parenthood Federation of America, Cecile Richards, said that the bill will not protect women’s health and safety. Planned Parenthood called on Gov. Jindal to veto the bill, but the plea went unheard.

More in this category: « Louisiana Demos use Equal Pay to cover agenda for State Power Supreme Court: Greenhouse Gases, Sports Betting, and Abortion »
back to top