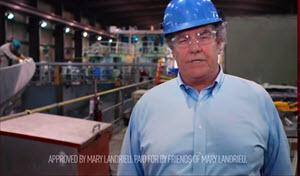 In April, shipbuilder Boysie Bollinger announced in an advertisement that he supports Sen. Mary Landrieu. Today, Landrieu announced that $318 million for six Fast Response Cutters (FRC) has been included in a bill that funds the Department of Homeland Security for FY15. The six ships are to be built by Bollinger Shipyards. In a press release, Landrieu said: "We must replace the Coast Guard's aging fleet for it to keep carrying out its vital role in protecting our nation. Today's funding will provide the Coast Guard with these exceptional boats, allow the Coast Guard to carry out critical lifesaving, law enforcement, and homeland security missions and support 3,000 jobs in Southeast Louisiana."

According to the Landrieu press release, "This number is four above the President's request—two above the House’s funding—to maximize the production line at six boats, generating savings of $5 million per ship and total of $30 million for taxpayers. According to a recent GAO report on Coast Guard acquisitions, the decision to order ships at the rate proposed by the Administration would add $600 million to $800 million in cost and five years to the cutter’s final delivery date.

The Coast Guard intends to acquire 58 FRCs, of which 36 have been funded."

In addition to serving as Chair of the Senate Energy and Natural Resources Committee, Landrieu is also Chair of the Appropriations Committee's Subcommittee on Homeland Security.

Read more about the Bollinger commercial and the relation between Sen. Landrieu and Bollinger Shipyards here.

In addition to the press release involving the FRC's, Landrieu's office also released Tuesday morning, the below information about the FEMA flood maps and cybersecurity:

As part of her ongoing efforts to build a more affordable National Flood Insurance Program (NFIP), the chair of the Senate Homeland Security Appropriations Subcommittee,U.S. Senator Mary L. Landrieu, D-La., today announced that she has included $100 million for FEMA to update and correct flawed flood maps across the country. The Senator reversed the President’s $11-million cut to the program and added an additional $5 millionafter David Miller, the head of FEMA’s NFIP, testified in May that most of the nation’s flood maps are not accurate and reliable. When added to the $121 million in fees dedicated to mapping activities, the bill provides $221 million total for updating flood maps.

The funding is part of the bill that funds the Department of Homeland Security for FY2015 and keeps the promises that Sen. Landrieu made earlier this month in New Orleansto reverse the President’s shortsighted cut to the program. Sen. Landrieu also announced that on July 23, 2014, she will conduct a hearing to hold FEMA accountable for implementing the Homeowner Flood Insurance Act accurately and efficiently. The hearing will focus on pressing FEMA to release the additional guidance insurance companies need to calculate and process refunds to individuals that paid more than they should. The bill is expected to pass the Senate Appropriations Committee Thursday.

The Chair of the Senate Homeland Security Appropriations Subcommittee, U.S. Senator Mary L. Landrieu, D-La., today announced that she has included $757 million for cybersecurity programs as part of the Senate bill to fund the Department of Homeland Security (DHS) for FY2015.   This significant level of funding will help grow Louisiana’s I-20 Tech Corridor, create cybersecurity jobs and help keep the nation safe from ever-increasing cyber threats. The funding also includes $15.8 million for cybersecurity education programs like the one the Cyber Innovation Center (CIC) in Bossier City, La., which has been operating as an integral part in the Department of Homeland Security’s efforts to develop a future skilled workforce.