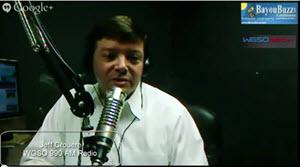 How important is seniority and clout in the U.S. Congress?

That issue is being tested during this 2014 election season in various states and particularly within the Republican Party as the Tea Party candidates are taking on the mainstream incumbents.

The upcoming election for U.S. Senate for the seat held by Senator Thad Cochran is no exception.

Overlaying the Louisiana election is the issue of seniority-power-clout versus voting records.  Surprisingly, this issue has become even more accentuated with the Louisiana Republican Congressman Steve Scalise’s sudden rise to power as Majority Whip.

Here are relevant excerpts from the webcast:

Sabludowsky: Sure, I mean, I definitely agree with that. You and I differ in terms of the importance of clout in Congress. I consider it to be very important. I wrote a column about it last week. Basically what I wrote was that, well, if Scalise, why not Landrieu? In no way is this an endorsement of anybody. But I do think you have to recognize the clout that does exist. And do you want to give up that clout? What I'm saying is that if you're out there saying, "Well, Scalise is going to be good for Louisiana because he is now number 3 Republican in the House," which I think that's correct. I think that's true. We should be proud of him. Whether he's Republican or Democrat, we should be proud of him. We should expect something because of his incredible ascendancy in the House of Reps, at least in terms of the Republican Party in the House of Reps. So if that's your feeling, if you're proud of that for that reason and expect something because of his clout, then I think that you should expect the same for and be proud of Mary Landrieu, too. Now, it doesn't mean that you should vote for her for that reason. But to completely dismiss it, that the clout...I totally disagree.

Sabludowsky: And I certainly made that argument with the column, and that is that I think you have to factor all that in. But to say, look, seniority is irrelevant, it's not important, and that her clout is not really going to help Louisiana. Quite frankly, I was taking issue with the National Republican Senatorial Committee that was saying that Mary Landrieu's position as Committee Chairwoman in the Energy and Natural Resources Committee was actually hurtful to Louisiana. I got to tell you, I think that's a lot of junk. I mean, there's no way that it's hurtful to Louisiana.

Crouere: I think her voting record is hurtful to Louisiana.

Sabludowsky: Okay, and that's a different issue. But don't tell me that her position in terms of her positions in the Committees, whether it's Small Business or, say, Homeland Security or Energy...Don't be dismissive and say it's hurtful. Not just dismissive, but trying to turn it around and saying, because she's so powerful, we ought to get rid of her because she's not helpful to Louisiana in terms of energy. Come on! Weigh everything, yes, absolutely, including her voting record, and it's not in step with the voters of Louisiana.

Crouere: And that's a problem.

Sabludowsky:That's an issue she's going to have to deal with.

Crouere: Also, I mentioned, Steve, that this week, Col. Rob Maness announced that he'd gone over $1 million in fundraising. He has received 22,000 donations from 17,000 different donors. I think that's pretty darn impressive. Your thoughts?

Sabludowsky: Oh yeah. Absolutely. I think it's impressive; I think it shows the influence of the Tea Party here in Louisiana. Whether or not it translates into a greater percentage of voters in the jungle primary, I mean, we'll see.

Crouere: Also, I think the constant negative ads about Cassidy got to be having an effect. A lot of them on the radio; a lot of them coming on TV. He's getting hit pretty hard.

Sabludowsky: Yeah, he has yet to really define himself. You know, for an example, I don't know where he stands in the area of, say, the Affordable Care Act, aka Obamacare. He says he wants to replace it. Is that the same thing as repealing it? I don't know. Is he doing a Vitter and saying that he would be in favor under certain circumstances to allow for the Medicaid expansion? I don't know. I mean, these are word games, but they have meaning.

Crouere: And in his comments, if people aren't signing up for Obamacare because maybe they're illiterates. That could have been a real faux-pas that I think might hurt him.

Sabludowsky: I think the Democrats may weigh too much on that. I think there is an element of, call it illiterate or uneducated. Certainly, I don't think they're, and I want to make sure I use my words right here, but I don't think they're savvy about healthcare insurance. They're not that knowledgeable about insurance and computers. There is obviously an issue about education in terms of their reading level. Now, that's true, whether they're white or black. You know, that's just the way things are. I think too much was made out of that.

Sabludowsky: No, not anymore than, let's say, Landrieu is being unfairly attacked. I don't think they're unfairly attacking him on that issue. I haven't heard them make...have they made anything about that?

Crouere: Actually, it's conservatives that are attacking him on his comments about what they're calling Cassidy Care, which is sort of his version of Obamacare. I guess you had Romney Care; now we got Cassidy Care.

Crouere:Well, not all Republicans, Steve. I mean, a lot of Republicans battled against Hillary Care and stayed consistently opposed to it. Some did support a version of it, but a lot didn't. Let me ask you this. You mentioned Governor Jindal. Do we know if he's in the state today?

Sabludowsky: That's my understanding. Obviously, the Jindal people, I think he addressed that, they said with today's technology, Jindal actually is still the Governor. I recall reading something that Jim Brown had written once and that is in terms of having to actually sign legislation. The person has got to be in Louisiana. The Governor got to be in Louisiana. Whether or not any of that changed because of new technology, etc, I don't know. Yeah, it doesn't surprise me if he's elsewhere. Especially now that the session for all intents and purposes is over.

Crouere: The reason I ask is that, of course, with the Presidential race coming up, we're going to have more and more incidences where he is going to be outside of the state. I just think he would do us all a favor by resigning and actually devoting his full efforts to the Presidential race without really the sideline of being Governor, without the hobby of being Governor, still tugging at him. He can have no qualms about where he goes or what he does. Full-time Presidential candidate and travel non-stop across the country and not have to come back here for ribbon cuttings or whatever. I think that would be doing us all a favor. Your thoughts?

Sabludowsky: Well, I mean, I certainly agree. Back in 2007, when he ran for Governor at the time, if I recall correctly, I was about the only person who was writing and the only media that I know of that questioned anything about Jindal. The media certainly just gave him a pass. One of the things I wrote then was, "Wait a minute. This guy has only made three or four votes in Congress for the year." Even some dead people made more votes than he did. Not like he was running against, honestly, there wasn't anybody really running against him at the time. Yet he wasn't up there even though he was getting paid for it. So I have some real questions as to, whether it's Mary Landrieu or David Vitter, anybody running for an office, especially if it's a different office.

Crouere:And I hate that. I hate when they use one position to run for something else. They don't finish the term that they run for, and they're already running for the next position. By the way, I was writing columns back then, too, critical of Governor Jindal. I was off of his bandwagon a long time before that race. As far as this Tea Party individual who's going to be coming on, talking about the race in Mississippi. Obviously, it's a big deal to them. I think they're staking a lot in Mississippi. If they lose that race to an establishment candidate, I think that’s bad news for Rob Maness. I think that's bad news for all the folks who are challenging the incumbent establishment candidates across the country. I think it could have implications.

Sabludowsky: Well, you know, I think that each district, or say, entities of the state I don't necessarily pay that much attention to, well,  if somebody wins here, then it opens the door elsewhere. Yeah, I think to some extent that's true, but I don't think that...

Crouere: But the Eric Cantor race, you don't think that have implications nationally?

Sabludowsky: I think that from what I can gather, from what I've read and have seen, that yes, it does have implications. But it was more about Cantor than about, say, the Tea Party. So I think it's a wake-up call. I think that incumbents should recognize that they can't take anything for granted. But does it mean that, say, incumbents are going to fall like dominoes in the upcoming months? I don't think it necessarily means that at all. Not at all. I think, again, I don't think anybody can take anything not serious.  At this point in time, again, Obama is at a record low. Democratic Party is. Republicans are even lower than that. What does that mean? It depends upon each particular race, I believe.