Do a Palin, Governor Jindal, resign 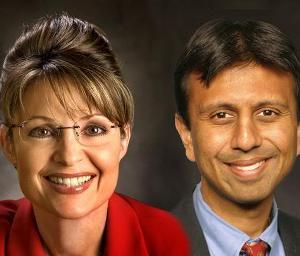 It is apparent that Bobby Jindal needs to focus more on his main job. Over the next few months, the demands will increase exponentially. Therefore it is necessary for Jindal to give up his sideline position as it may interfere with his goals and ambitions which are all connected to his high profile all encompassing obsession.

It is time for Bobby Jindal to resign as Governor of Louisiana so he can concentrate all his energies on his true interest, running for President of the United States.

In this way, Lt. Governor Jay Dardenne can assume the position of Governor and fill the remainder of Jindal’s term. The advantage of Dardenne being Governor is that the state would have a full time leader for the first time in six years.

As Governor, Dardenne will not crisscross the nation in pursuit of Republican Party fundraisers or speaking opportunities. He will focus on addressing the many problems we have in our state. Currently, Louisiana citizens are being held hostage to the political ambitions of Bobby Jindal. Governor, let our people go!

When the Governor travels, taxpayers are impacted by Jindal’s focus on issues outside of the state. Since we pay his salary, he should be doing his job, first and foremost, and not treat the position of Governor as a hobby. In addition, state taxpayers must pay for the travel costs of the security entourage who accompany the Governor. These funds should be reimbursed to state taxpayers since the trips are primarily not related to Louisiana business, but to Governor Jindal’s political aspirations.

Governor Jindal should follow the lead of former Alaska Governor Sarah Palin. When being Governor of Alaska became too bothersome for Sarah Palin, she resigned her position to pursue a career as an author and Fox News political commentator. Palin longed for the national spotlight and to speak out on issues with broader implications than just Alaska, so she started traveling throughout the country. At least Palin recognized that she was bored with state concerns and that the voters of Alaska deserved a full time Governor. Hopefully, Jindal will come to the same realization.

Like Palin, Jindal is constantly looking for national attention, frequently showing up in Iowa, New Hampshire or Washington D.C. Last year, he traveled 20% of the time and this year his travel schedule has been even more intense. It will only get worse as the 2016 presidential election draws nearer.

It is clear that Jindal would love to be free from the burden of his pesky sideline. Just look at the last legislative session when he almost never showed up in Baton Rouge. Clearly, legislators adapted and realized that the Governor is not needed. In the last session, the legislature acted independently and treated the Governor as an afterthought. One legislator remarked that he possesses as much allegiance to the Governor as he does any stranger on the street, because “Bobby Jindal is a virtual stranger to me.”

The Governor can now leave because he has already used his position to garner national headlines. Recently, he switched his position on the educational program “Common Core.” This resulted in cable news publicity for Governor Jindal, but confusion for his constituents.

Governor Jindal appointed the Education Secretary and campaigned for the majority of the members of the Board of Elementary and Secondary Education, all who vigorously support Common Core. In fact, Jindal helped craft Common Core and was an enthusiastic early proponent of the program. Then, the political winds shifted and so did Bobby Jindal.

As we have seen in Louisiana, Bobby Jindal will go on any television program, travel to any “rubber chicken” dinner banquet or change any political position, no matter how long he has held the view, to enhance his chances to be the GOP presidential nominee.

In reality, his long shot campaign for the Republican presidential nomination is more like an audition to be the party’s vice presidential candidate. Jindal hopes that if he can attack President Obama enough and attend enough GOP fundraisers, then maybe the party’s eventual nominee will consider him for the second slot on the ticket.

In the meantime, Bobby Jindal remains relatively unpopular at home, even though Louisiana is a conservative state. Voters here realize they are obviously being used as a stepping stone to national glory and they don’t appreciate it. It is insulting, especially when the magnitude of the state’s troubles is examined. From budget woes to a crisis in higher education, these are difficult times in Louisiana.

If Jindal resigns, Governor Dardenne could focus on these problems with his full attention. Bobby Jindal would be released from dealing with these boring Louisiana issues, the ones he never really cared about anyway. His eyes have always been on a higher prize.

By resigning, Bobby Jindal would become the first official Republican presidential candidate, giving him another dose of his aphrodisiac, national publicity.

It is time for the Governor to seize the day and follow his real ambitions. This would be a godsend for the people of Louisiana who have been mistreated for too long. We deserve some leadership and attention for a change.