Louisiana For Lifelife or Obama Phone: Unnecessary entitlement or worthy? 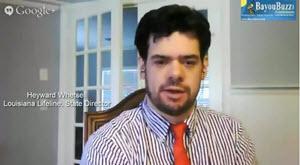 Louisiana Lifelife or Obama Phone:  Is it nother expensive and unnecessary federal entitlement or a worthy and totally misunderstood program?

Proponents of the program, which started under President Ronald Reagan, believe it is a worthy program, that is not funded by the federal tax-dollars, enabling millions of the poor, the aged, the disabled and the  veteran population to have access to a necessary communication device, a telephone with limited features and minutes of availability.

Others deride the program as another federal boondoggle and unnecessary “entitlement”.  In fact, the phones are commonly called by those opposed to the program as being “Obama phones”, named after the President of the United States, who also has advocated the Affordable Care Act and the Stimulus.

In part, because of the negativity attached to the program utilized by so many in need, Louisiana for Lifeline recently opened a Baton Rouge office and launched a public campaign today “to spread facts about the Lifeline program”

In a press release by Louisiana for Lifeline, the program, “provides phone access to Americans who cannot otherwise afford it. The non-partisan program, which began under the Reagan administration and expanded during the presidency of George W. Bush, has come under attack recently by a small, yet vocal set of politically-motivated individuals. Louisiana for Lifeline is advocating on behalf of the more than 364,000 people who depend on the Lifeline in Louisiana, which includes some 156,000 seniors and 36,000 U.S. veterans. {snippet 65}

“Lifeline gives people a helping hand when they need it most. It helps communities stay connected, safe, and healthy,” said Heyward Whetsell, the organization’s state director. “There has been an abundance of misinformation on Lifeline, and we are here to set the record straight.”

The campaign is set to include town halls, meetings with elected officials, Google Hangouts, and visits by influential supporters.

Last week, Stephen Sabludowsky, publisher of Bayoubuzz.com, interviewed Whetsell, to obtain more facts about the program, to understand those benefits offered to the most needy population in Louisiana and to provide information to those uncertain whether the program is indeed worthy.  Please watch the video for the relevant excerpts.

More in this category: « Opposition to Duck Dynasty Biz sponsorship of Independence Bowl is intolerant Full voodoo Moon over Louisiana swamps and politics »
back to top