Now for a commercial break: Koch's versus Landrieu 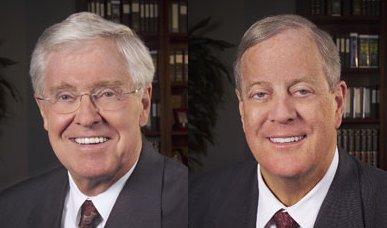 And now, for a commercial break.

It’s time again for the Koch brothers through its "generous" contibutions of the Americans for Prosperity vs. the US Senate campaign of Mary Landrieu.

The AFP announced early this week that it was launching a “major new multimedia effort in Louisiana. The group is launching TV and digital ads aimed at educating the public on the big-government policies that are hurting the state.”

In a press release, the AFP also said, the group is launching two spots, "Veterans Speak Out," and "Clout." In "Veterans Speak Out," a group of military veterans urge Senator Mary Landrieu to fix their health care system before pushing ObamaCare on the rest of the country. These Americans question how ObamaCare could work for a whole country when the government can't provide quality care for 8 million vets.

"Clout" documents the job-killing, cost-hiking regulations that the EPA has proposed in spite of Senator Landrieu's assertions that she has pull in Washington when it comes to energy policy.

AFP-Louisiana State Director Phillip Joffrion had the following to say:

"Whether it's energy, health care, or outrageous overspending, this big-government agenda is making life tougher to afford for hard-working Louisiana families. Senator Landrieu hasn't fixed any of it. Louisianans shouldn't have to wonder whether they'll need to choose between higher energy bills or putting food on the table. While Senator Landrieu says she is fixing ObamaCare, Louisianans are still facing lost access to trusted doctors and higher premiums every month. The unacceptable treatment our veterans have received should serve as a warning: government-run health care is not the way forward for our state."

The commercials come at a time that Bill Cassidy, Republican candidate for US Senate continues to promote himself statewide with TV commercials promote his medical background as a physician but do not mention Landrieu by name but instead attacks Obamacare and big government.

While candidates often attempt to introduce themselves to the voting public by focusing upon themselves during the early months of campaigns, the fact that Cassidy has not mentioning his opponent by name, but instead is attacking Obamacare plays into the argument that outside Super Pacs such as the AFP might be coordinating with the campaigns, which is prohibited.

The campaign commercials of Moon Landrieu talking politics with his daughter also do not mention Cassidy or any other candidate by name either.   While these commercials apparently designed to "soften" up her image and to help make her more likeable, have coincided with her PAC slamming the republican for being the author of “Obamacare Lite” .

As now has become the case in politics, Landrieu's response to the AFP slams came through the words of her campaign manager, Adam Sullivan.  He has called the recent Koch ads as  “falsely attacking” and "dispicable" as Senator Landrieu “on her proven record supporting oil and gas and issues at the Veterans Administration discovered earlier this spring.

“What we’ve seen today is a despicable new low on behalf of the shady group Americans for Prosperity, but unfortunately these kind of misleading attacks have become par for the course from the Koch brothers,” said Adam Sullivan, Campaign Manager for the Landrieu campaign. “Senator Landrieu has always been an advocate for the oil and gas industry and has done everything possible to support our veterans and military families. She’s been a leader in opposing the Obama Administration’s new EPA regulations announced last month and was one of the first Democrats in Congress to call for Secretary Shinseki’s resignation after the problems at the VA were brought to light earlier this year.”

Senator Landrieu has been one of the strongest voices in Washington for the oil and gas industry and has consistently stood against burdensome power regulations proposed by the Obama Administration. In addition to calling the newest Environmental Protection Agency (EPA) regulations, introduced this spring, impractical, Senator Landrieu specifically called for the EPA “to amend this overreach.” Additionally, throughout her time in the U.S. Senate, Senator Landrieu has cosponsored and signed on to bipartisan legislation that calls on the EPA to scale back unfair rules and blocks the massive overreach by the Obama Administration.

Senator Landrieu was also the key vote in successfully blocking the Administration’s 2009 Cap and Trade Bill, even being cited by the Republican National Committee (RNC) as a leader in the opposition to Cap and Trade.

Senator Landrieu has been a leader in reforming the VA to better serve our veterans as well. Not only was Senator Landrieu one of the first Democrats in Congress to call for the resignation of Secretary Eric Shinseki after the scandal at the Department of Veterans Affairs (VA) broke out, but she also voted for bipartisan VA reform legislation that included her language to authorize new VA clinics in Lafayette and Lake Charles.

Senator Landrieu has also co-sponsored bipartisan legislation to hold the VA accountable for mistakes of the past and has numerous times supported funding for veterans’ health care, voted to expand health care coverage for military retirees, and fought to improve military health care programs already in place.

Sullivan added, “These are exactly the kind of attacks Louisianians are fed up with and won’t stand for any longer. Senator Landrieu led the charge on the bipartisan Veterans Affairs bill that includes a green light for two delayed health clinics in southwest Louisiana and was able to bring the Secretary of Energy down to Louisiana to highlight energy production on our coast, but all AFP aims to do with these ads is scare voters with false attacks.”