Jindal legacy: The man who would have been king 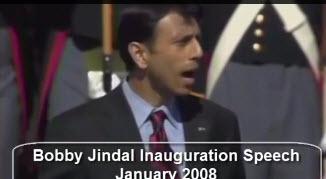 Much has been said Governor Jindal and the fawning national media who seems to want the world to believe   that Louisiana has been suddenly transformed by a “Bobby Jindal magical wand”.

After all, some of the GOP’s lead-thinkers, Newt Gingrich and no less than Mount Rushmore Limbaugh told us he was the real-thing.  Remember, the former called him “transformational”.

Yet, many in Louisiana, over the past few years have been wondering just what brand of Colorado Gold might Politico, the National Review, Fox News and others, be smoking?

There is a real disconnect between Louisiana voters, who obviously are quite familiar with Jindal, the image and the, reality.

Looking back, Bobby Jindal came onto the political scene with great hope and promise.

During his 2007 elections, the local media and business groups acted as if he was the “messiah”.

After Hurricanes Katrina and Rita ripped Louisiana to shreds, voter remorse set in.  Bobby Jindal, the child prodigy, could not only walk on Katrina waters, but he could make rivers part.  Alas, he would take us to the promised-land.

In doing so, he promised us ethics reform and a gold standard of which to wear on our mantel.

His Louisiana would be “what you know, not who you know”.

Our government would be like “Louisiana families”, we would do it the “Louisiana Way”, not the “Washington Way”.   We would use our credit card to pay our mortgage--never again.

As governor, he saved us from “the stimulus”, and urged the GOP governors to follow his own golden trail.

The governor could not only deliver a baby on his own, but in forever-denouncing Obamacare, he told us  he knew “a thing or two about healthcare”.

He has painted Obama as incompetent in virtually every OPED calling the president, a waiver of the economic white flag.

However, as each day has passed, the Louisiana voters, have learned more and know better.

The self-heralded gold standard ethics became pyrite. His reform made the governor’s office less transparent,  than ever.

Despite the bluster, his state appointments were larded with “who you know” as they have been for decades, if not generations. Those wanting a government assignment better have wallet in hand.

His budgets were always balanced, by law.  Yet, the credit cards multiplied, the Blanco surplus whittled and the state now needs “credit assistance”.

His disdain of the “stimulus” made headlines.  So did the outing of his not disclosing that the giant checks of which he was photographed behind were laden with Obama’s Recovery Act funds.

He claimed his “miracle economy” was heads above all others--until his numbers became exposed.  The reality--our state’s domestic product over the past three years is laughably dwarfed by a very weak national economy.

The truth is, numbers don’t lie.

Poll after poll, for the past eighteen months, show the "boy wonder" wondering how and why the Louisiana voters have abandoned him.

Over that period, the political surveys have placed him as low as 25% and as high as 48%.

He shouldn’t fret, however. There’s always the silver lining.  The forever-“despised” and “incompetent” President Barack Obama’s favorables are a whopping one point lower, while both boast 53-percent unfavorable rankings.

So, do the national media types know more about the promises, the failures and the unpopularity’s of the governor than do the Louisiana voters?

As I look back and recall Bobby Jindal’s January 2008 inauguration words of promise and hope, I can only feel utter disappointment.  Politics and power has corrupted the man who could have been king.  One day, the rest of the world will surely know better.