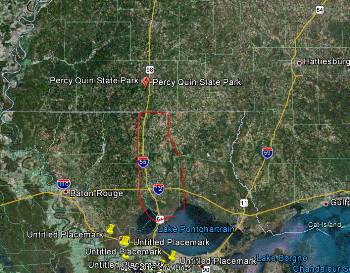 Governor Bobby Jindal flew over the dam at Percy Quinn State Park and met with local officials in Tangipahoa Parish to assess ongoing evacuations as a result of the potential breach of the dam in Mississippi.  Later in the day, Governor Jindal traveled to Madisonville today where he toured the damage done there by rising water levels as a result of Hurricane Isaac.

Governor Jindal said, “I talked to Mississippi Governor Phil Bryant and the folks in Mississippi are beginning the process of intentionally breaching the dam over in Mississippi.  The intent is to allow approximately 8 feet of water to come out and then reinforce the structural integrity of the dam.  They estimate that if the process is successful, and I want to emphasize that this is very preliminary based on rough modeling, that it would not have significant impact on water levels in Louisiana.

“We talked to the National Weather Service and without a breach of the dam we are looking at water levels being at 15 feet down river.  If a controlled breach is not done and the dam breaches then all that water would increase water levels to 17 feet down the river.  That’s close to what happened in 1983 and 1990 and just below the record levels of 17.5.  Make no mistake; it would be a significant flooding event for Tangipahoa Parish.

“The Corp of Engineers is working on inundation maps so that we have a better modeling of where this water will go and what areas need to be evacuated, but I want to emphasize that folks who live here and have lived here for a while know better than anyone else where this water went in 1983 and 1990.  If you live in a low-lying area, an area that’s flooded before, I strongly recommend you evacuate.  I strongly encourage you to listen to your local mayor, sheriff, or parish president.  If they suggest you leave then I strongly recommend that you leave.

“Certainly the hope is that the efforts in Mississippi will be successful, but even if they are successful, I would strongly recommend that folks in those zones near the river and in low-lying areas to evacuate and stay evacuated until the river crests.  If the dam were to breach in Mississippi it would be about 90 minutes for that water to get to the state line, but we don’t want people to wait.  The worse thing that could happen is that people get a false since of confidence and then if there be a breach overnight it would be a lot harder for people to evacuate.

“Even though we have the assets to do high-water rescues with boats and high-water vehicles, we think it would be much better for people and our first responders if people would self-evacuate.”