How would Jesus christ handle the border kids? 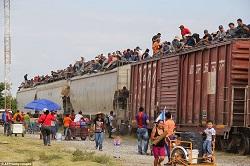 by Bob Mann; Read his blog, "Something like the truth"

Pity the poor American Christian. From every side, he is persecuted, set upon by government bureaucrats, forced to do this, required to do that -- denied his God-given right to pay low taxes and live as he pleases.

If he is a business owner and wishes to refuse his services to gays and lesbians, he finds it an appalling violation of his "religious freedom" to be told that the Constitution's 14th amendment might render his actions not merely deplorable, but also illegal.

America's Christians, mostly those on the political right, certainly are a persecuted and angry lot. As soon as some crazy liberal questions the sanity of toting guns into churches, schools or grocery stores, they're itching to fight.

Politician preachers -- like Gov. Bobby Jindal, former Sen. Rick Santorum (R-Penn.) and Texas Gov. Rick Perry -- never tire of preaching to Christians about the crucifixion liberals have in mind for them. Like the political carnies they are, these charlatans treat their supporters like they're a horde of dupes, easily persuaded they are the most disadvantaged people on earth.

Indeed, listening to the politicians as they preach, someone from another planet might conclude that Christian churches are filled with pious, intolerant, gun-toting, angry white men. You know, just like Jesus and his disciples.

Which raises the question: Why do so many religious conservative leaders -- especially the political variety -- speak so much about their "rights," but so little about actual teachings of Jesus?

More in this category: « Except for Walsworth, deafening silence over Edmonson amendment Hangouts, Google Showcase App, Uberconference: Commerce meets opportunity »
back to top