Google Hangouts, the video killer app of killer apps, keeps getting better and better for  the hectic worlds of politics, education, commerce and frankly, all industry sectors and professions.

For those who have followed Bayoubuzz, you probably are aware of the google hangouts we have done over the past almost two years.   After first discovering the incredible video technology Google Hangout and how it was being utilized with Google Plus social media and google apps, the technology curiosities have flowed like Niagara Falls on steroids.

Immediately, I started using the technology for media purposes  engaging in Google interviews with political leaders such as Louisiana Treasurer John Kennedy, Agriculture Commissioner Mike Strain and webcasting news conferences such as the post- Super Bowl press event after the lights went out in the Dome Stadium in New Orleans.

But, now, hangout technologies are not just hanging around resting on their collective laurels.

I am quite pumped about two new technologies in the form of Google Hangout Apps—featuring telephone conferencing and the showcasing  of products and services.

OVER THE UBER CONFERENCE

The telephone conferencing app, Uberconference, when combined with hangouts allow up to 15 people in the hangout filmstrip (the people displayed at the bottom of the hangout window) to watch a private event with presentation and conversation.  Think company meeting.  Think organization gatherings. 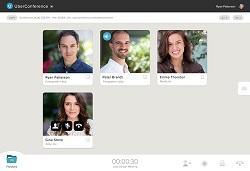 Up to 100 people can watch the same event and using phone and/or computer via voice over Internet.  Thus, Joe Businessman can communicate by phone while watching a webinar online.  Sally Businesswoman can do same by talk over the computer VOIP.

SHOW ME THE MONEY

This product is also a real game changer.  Why?  It expands the hangout to a real live e-commerce and information experience.

This new app allows us to put up clickable mini-sites (digital cards) within the hangout on air environment.  Thus, we can see from right part of the image below, viewers can click on the boxes and travel to the hyperlinked sources.

Here is an image from a recent test I performed:

Here and the image above are some other relevant images showing other applications:

There are so many applications and uses, it simply boggles the imagination.

Yesterday,  the first day the app was publicly released, I created this quick video to show an example as to how this can be used in online TV and in radio hangout broadcast environments.

According to Google, the app can help create a more engaging experience during your live

broadcasted Hangout.   You can:

• Promote a film or album release with links to ticket sales, trailers and

So, how can a product like the “showcase app” be used in the real worlds?   Well, close your eyes and imagine.  Watch the answers rapidly flow.

Far starts, politicos can hangout and showcase their webpages, commercials, contribution links and messages, Facebook pages and almost anything digital.

Organizations can sell tickets to galas, link to their donate pages, show videos of their most recent events and watch membership and contributions soar.

Businesses can present their latest product(s) in the hangout and invite audience members to order, download and even test drive.

Oh, and I forgot.

These events will likely in the future be promoted on the most powerful web property ever created—Google Search Engine.

Yes, Google just announced they will start posting some scheduled hangouts on Google Search.  While, this is experimental and not yet ready for prime time, you know it will just be a matter of time before our scheduled hangouts populate the search results.

While Uberconferences can only be conducted in closed video hangouts and for now, the Showcase app can only be done via a scheduled Hangout on Air, both of these new technologies expand the horizons.  Uberconferences advance the powerful communication system of the 20th century, the telephone—marrying it with 21st technology, online engaging.  The Google Showcase App enables Google Hangouts to be a shopping and marketing real-time platform, a feature sorely missing over the past two years of its existence.

More in this category: « How would Jesus christ handle the border kids? Media injects mercy in Joseph Wood lethal execution »
back to top