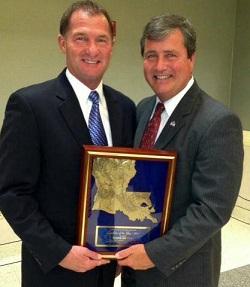 Were two separate announcements made late Friday by State Police Superintendent Mike Edmonson and State Sen. Neil Riser (R-Columbia) designed to neutralize State Treasurer John Kennedy’s calls for an investigation into the amendment to Senate Bill 294 that increased Edmonson’s retirement by $55,000 a year?

If so, Kennedy said, the tactic won’t work.

Without going through all the details of the amendment, there is one additional development that has gone unreported to this point (until it was pointed out to us first by reader Stephen Winham and then Kennedy):

Funding to pay Edmonson’s extra retirement income, which could cost the state more than $1 million over Edmonson’s lifetime, would come from the state’s Employee Experience Account (R.S. 11:1332) http://law.justia.com/codes/louisiana/2013/code-revisedstatutes/title-11/rs-11-1332 which set aside funds to provide cost of living raises for retired state troopers and survivors of slain troopers.

In other words, he would be taking from retirees, widows and orphans in order to increase his retirement from the $79,000 per year, or 100 percent of his salary, at the time he entered the Deferred Retirement Option Plan (DROP), to 100 percent of his current $134,000 a year salary.

In those two announcements, issued separately, Edmonson reversed his field and said he will not accept the increased pension benefits because “It’s been too much of a distraction.”

Riser, one of six members of the Legislative Conference Committee that brought the amended bill back to the House floor on the last day of the session, meanwhile, did an even bigger flip flop in admitting that he did indeed instruct a Senate staffer to add the key amendment to the bill authored by Sen. Jean Paul Morrell (D-New Orleans).

On July 17, Riser emailed blogger C.B. Forgotston who had sent Riser an email asking what he knew about the origin of the amendment. Incredibly, Riser said in that email, “I first saw the amendment when I read the conference committee report drafted by staff. As the language was explained to me, I believed it fixed a retirement problem for the law enforcement community.”

Basically, it was a denial without his actually denying he knew about the amendment.

But on Friday, Riser fessed up that he did indeed instruct staff (in this case, Laura Gail Sullivan, legal counsel for the Senate Revenue and Fiscal Affairs Committee which Riser chairs) to add the amendment. He still, however, stuck to his story that he saw the amendment on the “last hectic day of the session” and did not know the amendment would benefit just two people—Edmonson and a Houma trooper.

No wonder he was recently named Legislator of the Year by the Louisiana State Troopers’ Association—for the third consecutive year.

Taken together, the Friday statements by Edmonson and Riser appear suspiciously coordinated to neutralize Kennedy’s letter of one day earlier to the executive director of the Louisiana State Police Retirement System (LSPRS) in which he posed 13 questions he said needed answers.

Riser’s belated admission of his part in the amendment addressed only one of those questions and Kennedy said Friday that the investigation “must go forward” because “we still have a bad law on the books that we have to deal with.”

That’s because Gov. Bobby Jindal put his frequent flyer miles in abeyance long enough to sign the bill into law as ACT 859, prompting some to speculate that Riser’s actions may have been dictated by the governor’s office.

Kennedy said the LSPRS board has already retained outside legal counsel to determine what legal action is available to the board which is required by law to protect the fiduciary interests of the system.

“The board will meet in August to discuss our options,” he said. “We will invite Col. Edmonson to attend to present his side of the issue. We will also invite Sen. Riser and Thomas Enright, the governor’s executive counsel.”

He said that Enright, as the governor’s legal counsel, reads every bill and makes recommendations to Jindal as to whether the bills meet legal standards and if they should be signed or vetoed.

Without waiting for that August meeting, LouisianaVoice has a few questions of our own:

Why did Riser first deny his culpability and appear willing to throw his legal counsel under the bus?
What happened to compel him to cleanse his conscience?
Does he feel his constituents should trust him when he comes up for re-election after this despicable lapse of moral principles?
Who made the decision to fund this questionable (and most likely unconstitutional) appropriation from money intended to pay for retirees’ and survivors’ cost of living adjustments…and why?
Did Jindal direct that this amendment be inserted on the last day of the session?
If not, why did Enright not catch one of several possible constitutional violations contained in the amendment?
We’re glad that Riser, even belatedly, admitted his part in this farce of legislative procedure and we feel that Edmonson did the right thing in deciding to refuse the additional retirement money.

Suspicious by nature, however, we can’t help wondering about their motivations.